A fairly large river turtle, it averages about 29 to 30 cm (11 to 12 in) in length and weighs on average around 3 kg (6.6 lb), although large females can measure up to 40 cm (16 in) in length. It is endemic to the United States. The current range of the red-bellied turtle includes a population in Massachusetts which was previously considered a distinct subspecies (Pseudemys rubriventris bangsi) as well as the coastal areas of New Jersey, Pennsylvania, Delaware, Maryland, Virginia and North Carolina. 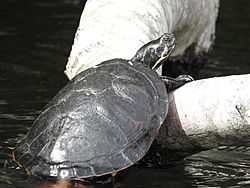 A northern red-bellied cooter in Long Pond in Plymouth, Massachusetts in July 2016.

The Massachusetts wildlife preserve foundation has started to repopulate the turtles by placing them in many south-eastern Massachusetts ponds. One example is at Long and Little Long Pond in Plymouth, Massachusetts, where the population is starting to regrow.

All content from Kiddle encyclopedia articles (including the article images and facts) can be freely used under Attribution-ShareAlike license, unless stated otherwise. Cite this article:
Northern red-bellied cooter Facts for Kids. Kiddle Encyclopedia.