Brownfield sites are abandoned or not very used industrial and business places available for re-use. Expansion or redevelopment of such a facility may be difficult by real or possible environmental contaminations. 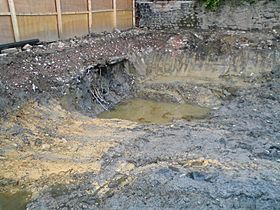 Example of brownfield land at a disused gasworks site after excavation, with soil contamination from removed underground storage tanks.

In the United States city planning language, a brownfield site (or simply a brownfield) is land previously used for industrial purposes or certain business uses. The land may be contaminated by low amounts of hazardous waste or pollution. It has the potential to be reused once it is cleaned up. Land that is more severely contaminated and has high levels of hazardous waste or pollution, such as a Superfund site, does not fall under the brownfield classification. Mothballed brownfields are properties which the owners are not willing to transfer or put to productive reuse.

In the United Kingdom and Australia, the term applies more generally to previously used land.

All content from Kiddle encyclopedia articles (including the article images and facts) can be freely used under Attribution-ShareAlike license, unless stated otherwise. Cite this article:
Brownfield land Facts for Kids. Kiddle Encyclopedia.