Finkel defines Spring Garden as "North of Benjamin Franklin Parkway to Fairmount Avenue, Broad Street to Schuylkill River." The Philadelphia Information Locator Service list (augmented from the Finkel 1995 list), repeats Finkel's definition of the neighborhood's boundaries. One qualification that should be added is that this definition would have Spring Garden as extending deep into Center City, nearly all the way to City Hall. The other boundary that most would agree Finkel omitted is Vine Street.

The Spring Garden Civic Association limits its purview to only the northern half of the above definition, as "between Spring Garden Street and Fairmount Avenue and between Broad Street and Pennsylvania Avenue/Fairmount Park."

Before the neighborhood was incorporated into the city of Philadelphia in 1854, the city of Spring Garden peaked at ninth on the list of the largest cities in the United States during the 1850 Census.

The neighborhood was originally part of the Northern Liberties, a township to the north of the city (which at that time was distinct from the other townships and municipalities within the County of Philadelphia). It was originally part of a manor (named Spingettsbury Farm) established by William Penn. During the late 1700s, the manor was split into two estates---"Bush Hill" (located to the east of 19th Street) and "The Hills" (located to the west of 19th Street). In the early 1800s, the estates were subdivided, and from 1850 to 1876, housing was developed in alignment with the city grid that had originally been established by William Penn.

The neighborhood name is quite old, going back many decades before Philadelphia's Act of Consolidation, when the area was part of the Spring Garden District of Philadelphia County, not yet part of the city. Finkel gives 1808 as the year it first appears in the written sources that he and his contributors consulted. The Philadelphia Information Locator Service list (augmented from the Finkel 1995 list), while repeating Finkel's definition of the neighborhood's boundaries, gives 1813 as the earliest year of use.

The neighborhood was once home to significant heavy industry. Many blocks of the neighborhood were once covered by the Baldwin Locomotive Works. Various Bement-related machine tool firms (William Bement & Son; Bement, Miles & Co; and then Niles-Bement-Pond) occupied the site where the Barnes Foundation museum now stands.

In the mid-to-late 20th century the gang 20Gs watched over ethnic Puerto Ricans in Spring Garden. 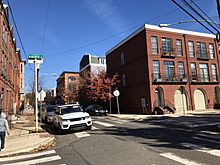 Despite the neighborhood's importance to American railway history, most of its rail infrastructure is gone. The Philadelphia and Reading right-of-way, cut down below street level, is abandoned to woods in one portion and serves as parking in another.

Several bus routes and a subway route connect the neighborhood to Center City and other city neighborhoods.

The 7 bus route runs south along 23rd Street from Brown Street to Spring Garden Street, where it turns southeast on Pennsylvania Avenue to 21st Street. From there, it heads south into Center City. At Market Street, it heads west to 23rd Street and then goes into South Philadelphia along 23rd.

The 48 bus route runs south along 23rd Street from Brown Street to Spring Garden Street, where it turns southeast on Pennsylvania Avenue to 21st Street. From there, it heads south into Center City. At Market Street, it heads east along Market to Front Street. Heading out of Center City, the 48 runs west bound along Arch Street to 22nd Street, where it turns north. Northbound, the 48 travels through the neighborhood on 22nd, crossing Spring Garden Street and Fairmount Avenue.

The 32 bus route runs southeast along Pennsylvania Avenue, crossing Fairmount Avenue and Spring Garden Street. At Hamilton Street, it heads east to 21st Street. From there, it heads south into Center City. At Market Street, it heads east along Market to Broad Street. From there it heads south along Broad Street to Washington Street, where it turns around. Heading north out of Center City, the 32 runs north bound along Broad Street, goes counter-clockwise around City Hall, and then heads east on John F. Kennedy Boulevard to 18th Street, where it turns north, returning to the Spring Garden neighborhood on its southern and western borders.

During rush hour, the 32 south bound runs every 10–11 minutes and takes 9–11 minutes to get from Pennsylvania Avenue and Spring Garden to 15th and Market. Likewise, during rush hour, the 32 runs north-bound every 10–13 minutes and takes about 10–13 minutes to get from 15th and John F. Kennedy Boulevard to Pennsylvania Avenue and Spring Garden Street.

Spring Garden is in the School District of Philadelphia.

Spring Garden is located in the Laura Wheeler Waring Elementary School catchment, although a significant portion of the neighborhood's elementary-school children who attend public schools attend schools outside the catchment such as Albert M. Greenfield Elementary School. Spring Garden is the home of the Benjamin Franklin High School and Franklin Learning Center, formerly William Penn High School for Girls. Spring Garden is also home of one of the top-ranked public high schools in the city and state, the Julia R. Masterman School at 1699 Spring Garden Street. Although students are, generally, automatically eligible to attend the neighborhood school, they may also attend other Philadelphia Schools (academic magnet schools, performing arts schools, and other out-of-catchment schools) through the school district's Voluntary Transfer Program.

All content from Kiddle encyclopedia articles (including the article images and facts) can be freely used under Attribution-ShareAlike license, unless stated otherwise. Cite this article:
Spring Garden, Philadelphia Facts for Kids. Kiddle Encyclopedia.