Kids Encyclopedia Facts
This page is about the park in Philadelphia. For the neighborhood, see Washington Square West, Philadelphia.

Washington Square (Originally designated in 1682 as Southeast Square) is a 6.4 acres (2.6 ha) Open-space park in Center City, Philadelphia, The southeast quadrant and one of the five original planned squares laid out on the city grid by William Penn's surveyor, Thomas Holme. It is part of both the Washington Square West and Society Hill neighborhoods. In 2005, the National Park Service took over ownership and management of Washington Square, through an easement from the City of Philadelphia. It is now part of Independence National Historical Park.

During the 18th century, the Square was used to graze animals and for burials by the city's African American community and as a potter's field, much like the park of the same name in New York's Greenwich Village. During the Revolutionary War, the square was used as a burial ground for citizens and troops from the Colonial army. 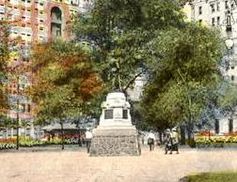 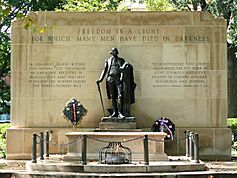 The Tomb of the Unknown Revolutionary War Soldier

After the Revolution, victims of the city's yellow fever epidemics were interred here, and the square was used for cattle markets and camp meetings. Improvement efforts began in 1815, as the neighborhoods around the square were developed and became fashionable. In 1825, the park was named Washington Square in tribute to George Washington and a monument to Washington was proposed. This monument was never built but served as the seed for the eventual tribute to soldiers of the Revolutionary War.

Washington Square included an area called Lawyer's Row at 6th and Walnut, on the site of the former Walnut Street Prison. The square was also home to the city's publishing industry, including the Curtis Publishing Company, J. B. Lippincott, W. B. Saunders, Lea & Febiger, the Farm Journal, and George T. Bisel Co., law publishers, now the sole remaining publishing house on the Square, with Franklin Jon Zuch serving as president since 1992. It has been located there since 1876 and still owned by the Bisel family.

Washington Square was the site of the first human flight in the Americas in 1793 when Jean Pierre Blanchard ascended in his hot-air balloon from the Walnut Street Prison.

Initially, the square contained monuments to those who had fought in the American Civil War. One such monument was the Washington Grays Monument. In 1954, the decision was made to remove the civil war commemorations and focus the square solely on the memory of the Revolutionary War.

In 1954, the Washington Square Planning Committee decided that, instead of the original proposed monument to Washington, a monument to all soldiers and sailors of the Revolutionary War would be built. The monument, designated the "Tomb of the Unknown Revolutionary War Soldier", was designed by architect G. Edwin Brumbaugh and includes a bronze cast of Houdon's statue of Washington as the monument's centerpiece. The Tomb includes remains which were disinterred, after archeological examination, from within the park from when it was a cemetery. The remains are that of a soldier, but it is uncertain if he was Colonial or British. An unknown number of bodies remain buried beneath the square and the surrounding area; some are still occasionally found during construction and maintenance projects.

A sycamore moon tree in the square, planted in 1975, was grown from seeds that had been carried to the moon by astronaut Stuart Roosa on the Apollo 14 mission. The moon tree died in 2009 and was replaced with a clone in 2011, which had also died as of November 2019, leaving the plaque in place.

All content from Kiddle encyclopedia articles (including the article images and facts) can be freely used under Attribution-ShareAlike license, unless stated otherwise. Cite this article:
Washington Square (Philadelphia) Facts for Kids. Kiddle Encyclopedia.