George Washington is a statue by French sculptor Jean-Antoine Houdon from the late 18th century. Based on a life mask and other measurements of George Washington taken by Houdon, it is considered one of the most accurate depictions of the subject. The original sculpture is located in the rotunda of the Virginia State Capitol in Richmond, Virginia, and has been copied extensively.

The original statue is carved from Carrara marble, weighing 18 tons. It depicts a standing life-sized Washington. In his right hand is a cane, his left arm rests on a fasces on which is slung his cape and sword, and at the back is a plow. He is shown wearing his military uniform, as Washington wished to be depicted in contemporary attire, rather than that of antiquity popular in Neo-classical sculpture.

With its selection of objects both civilian (the plow and cane) and military (the fasces, sword and uniform), the statue has been interpreted as invoking the imagery and ideal of an Ancient Roman dictator, Cincinnatus, with whom Washington has been compared in his decision to retire from public life following the Revolutionary War. At the time of its commission, Washington had not yet served in the Constitutional Convention, and would not become President of the United States until 1789.

Chief Justice John Marshall, a contemporary of Washington's said of the work, "Nothing in bronze or stone could be a more perfect image than this statue of the living Washington." 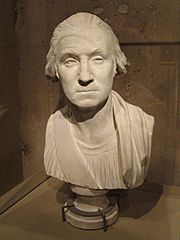 During the design process, Houdon produced this plaster bust of Washington in 1786. He later revised it before making the final statue. (National Portrait Gallery)

In 1784, the Virginia General Assembly commissioned a statue of George Washington "to be of the finest marble and the best workmanship," necessitating a European craftsman. The Governor of Virginia gave the responsibility of selecting the artist to Thomas Jefferson, then ambassador to France, who together with Benjamin Franklin recommended that Jean-Antoine Houdon, the most famous sculptor of the day, execute the work.

Unsatisfied to work from a drawing of Washington by Charles Willson Peale sent for the project, and lured by a potential commission for an equestrian monument by the Congress of the Confederation, Houdon agreed to travel to the United States to work directly from Washington. His voyage was conditional on his life being insured for the trip, asking "that ten thousand livres be paid to his family should he die during the voyage". On July 28, 1785, (or, July 22, 1785 ) Houdon sailed with Benjamin Franklin and "two of his workmen" from Southampton, England, arriving in Philadelphia, Pennsylvania on September 14.

In early October 1785, Houdon along with three assistants stayed at Washington's plantation Mount Vernon, taking detailed measurements of Washington's arms, legs, hands and chest and making a life mask of his face. By December, Houdon had returned to France.

Though inscribed with the date "1788", it was completed in France in 1791 or 1792 (depending on the source). It was finally delivered to Richmond in 1796 and placed in the rotunda on May 14, 1796. Various explanations for the delay in its delivery have been given, including the French Revolution and untimely payments to Houdon, though most sources agree that the continued construction of the new Virginia State Capitol prevented its installation until the time it arrived.

The equestrian monument that originally attracted Houdon to America was never commissioned. The 1783 resolution authorizing such a statue would eventually be fulfilled in 1860 when Clark Mills's equestrian statue of George Washington was installed at Washington Circle.

In the early 21st century the statue, together with the life mask and bust created by Houdon during the design process, were used as part of a forensic reconstruction of George Washington at various ages undertaken by Mount Vernon.

Beginning in the 19th century, numerous copies of the statue have been made in bronze and plaster, with molds often made directly from the original.

Following the destruction of a statue of Washington created by Antonio Canova when the North Carolina State House burned in 1831, there was a fear that a similar fate might befall Houdon's statue. During the 1850s, the Virginia General Assembly authorized the casting of 11 bronze copies of the monument. Six bronzes were produced by the foundry of Richmond artist William James Hubard. Known casts from the Hubard foundry are located at:

A plaster cast by Hubard, once located in the U.S. Capitol, was moved in 1950 to the Smithsonian American Art Museum, and in 2007 transferred to the Jamestown-Yorktown Foundation in Virginia.

In the early 20th century (1908 or 1909), the Commonwealth of Virginia commissioned a new cast to be added to the National Statuary Hall Collection. It is now one of six state statues located in the United States Capitol rotunda in Washington, D.C.

In 1910 an act of the general Assembly of Virginia stated, "That the permission and authority of the State of Virginia be .... granted to the Gorham Manufacturing Company .... to make further copies or reproductions of the Houdon statue of George Washington from the molds now in possession of said company... belonging to the State of Virginia, for any National, State, Territorial, County of Municipal Government ...... for any university, college, school, library, art gallery, or other educational institution: for any patriotic society ..... related to the history and achievements of George Washington." Each copy was to be stamped with the great seal of Virginia and the phrase, "Copied from the original by Houdon..." Gorham was to pay the state $500 for every statue made. The Virginia legislature banned future taking of molds, and so the subsequent casts were made from existing molds.

The known locations of the Gorham casts include:

This work was originally placed in front of the museum, but in 1979 was moved indoors, and is presently in the Chicago City Hall.

Further copies were produced for the bicentennial of Washington's birth, and are located in:

Obtained by a local branch of the DAR. Toppled in November 2020.

Since the Gorham castings, a few additional ones have been made:

In addition to bronze castings, an unknown number of plaster casts were made, including one from 1932 on display in the Indiana Statehouse in Indianapolis, Indiana, and one in George Washington Hall of the University of Mary Washington in Fredericksburg, Virginia of unknown make, dating to the 1930s.

All content from Kiddle encyclopedia articles (including the article images and facts) can be freely used under Attribution-ShareAlike license, unless stated otherwise. Cite this article:
George Washington (Houdon) Facts for Kids. Kiddle Encyclopedia.