The Civic Center neighborhood of Los Angeles, California, is the administrative core of the City of Los Angeles, County of Los Angeles, and a complex of city, county, state, and federal government offices, buildings, and courthouses. It is located on the site of the former business district of the city during the 1880s and 1890s, since mostly-demolished. 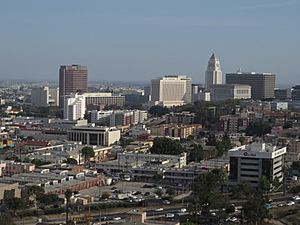 View of the Civic Center from Dodger Stadium.

The Civic Center has the distinction of containing the largest concentration of government employees in the United States outside of Washington, DC. The reason for the high concentration is simple: Los Angeles is the most populous county in the United States and its second largest city, and houses several state and federal functions for the region.

The Civic Center is served by numerous Metro buses, most of which run to adjacent Union Station, the 101 and 110 freeways, and the Metro B Line and D Line's Civic Center/Grand Park Station are also in the vicinity. OCTA, Foothill Transit, DASH shuttles, Commuter Express and other municipal bus lines also serve the area.

The Regional Connector, currently under construction, will serve this area with two stations at Second/Flower and Second/Broadway station.

The Civic Center area is part of the ongoing Grand Avenue Project, which aims to develop existing parking lots in the area for residential and commercial use as well as create a Grand Park between the Los Angeles Music Center and City Hall.

All content from Kiddle encyclopedia articles (including the article images and facts) can be freely used under Attribution-ShareAlike license, unless stated otherwise. Cite this article:
Civic Center, Los Angeles Facts for Kids. Kiddle Encyclopedia.