The old State House was constructed between 1786 and 1790. This man James Hoban, a young Irishman who emigrated to Charleston shortly after the Revolution, was the architect. Upon the recommendation of Henry Laurens, President Washington engaged him to design the executive mansion in Washington. Old pictures of the two buildings show architectural similarities.

The Old State House was destroyed during the burning of Columbia in 1865.

Three images of the modern Statehouse 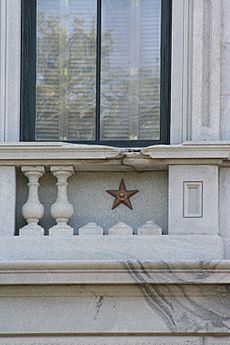 Example of one of the six bronze stars, marking the spots hit by Sherman's cannons 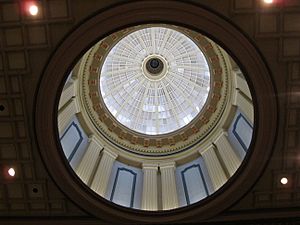 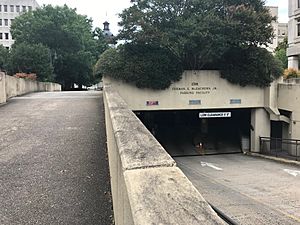 The South Carolina State House was designed first by architect P. H. Hammarskold. Construction began in 1851, but the original architect was dismissed for fraud and dereliction of duty. Soon thereafter, the structure was largely dismantled because of defective materials and workmanship. John Niernsee redesigned the structure and work began on it in 1855, slowed during the Civil War, and was suspended in 1865 as General W.T. Sherman's U.S. Army entered Columbia on February 17. Several public buildings were "put to the torch" when United States troops entered the city.

Reconstruction-era poverty slowed progress. The building's main structure was finally completed in 1875. From 1888 to 1891, Niernsee's son, Frank McHenry Niernsee, served as architect and much of the interior work was completed. In 1900 Frank Pierce Milburn began as architect, but was replaced in 1905 by Charles Coker Wilson who finally finished the exterior in 1907. Additional renovations were made in 1959 and 1998.

The State House was designated a National Historic Landmark in 1976 for its significance in the post-Civil War Reconstruction Era. 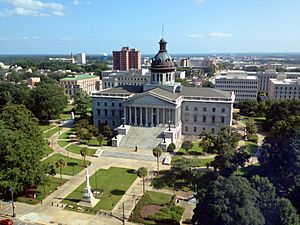 South Carolina State House from the 15th floor of the Main and Gervais Tower. 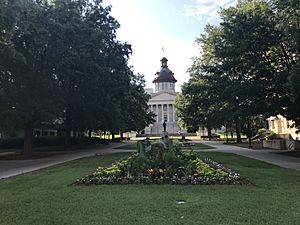 Statehouse grounds from the South

The building's grounds are home to several monuments. On the north side, leading to the main entry, is the Confederate Monument which included a flagpole flying a traditional version of the Confederate battle flag until it was removed on July 10, 2015 by State Bill. The monument was established after a controversy during the state's 2000 presidential primary about the Confederate flag flying over the dome of the State House. The flag was originally placed over the dome in 1962 by a concurrent resolution of the state legislature during the commemoration of the Civil War centennial. The resolution failed to designate a time for its removal. The flag was moved near the monument on July 1, 2000, after passage of the South Carolina Heritage Act of 2000. It was then removed from the grounds on July 10, 2015, by order of Republican governor Nikki Haley, and given to the South Carolina Confederate Relic Room & Military Museum.

On the east side is the African-American History Monument, authorized by Act 457 of the General Assembly and unveiled on March 26, 2001. 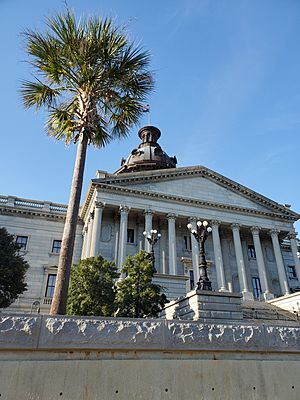 The State House viewed from the south.

The grounds also include the following monuments:

Captain Swanson Lunsford (d. 1799), a Virginia-born American Revolutionary War officer who once owned land that is now part of the State House, is buried on State House grounds, along with a marker erected by his descendants in 1953.

Images of stateues on the Statehouse Grounds

All content from Kiddle encyclopedia articles (including the article images and facts) can be freely used under Attribution-ShareAlike license, unless stated otherwise. Cite this article:
South Carolina State House Facts for Kids. Kiddle Encyclopedia.