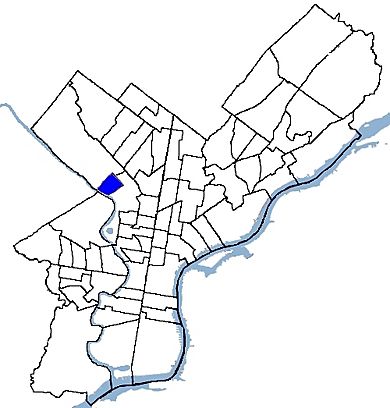 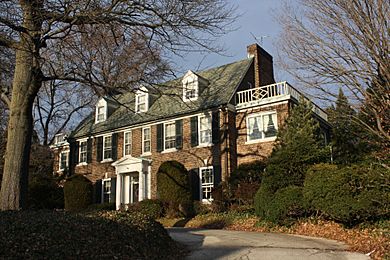 East Falls is a neighborhood in the Northwest section of Philadelphia, Pennsylvania, United States on the east or left bank side of the now submerged Schuylkill River cataracts, the 'Falls of the Schuylkill' that became submerged as the Schuylkill Canal and Fairmount Water Works projects were competed in 1822. The East Falls community is located adjacent to Germantown, Roxborough, Allegheny West, and Nicetown-Tioga neighborhoods. East Falls is also adjacent to Wissahickon Valley Park. The neighborhood runs along a stretch of Ridge Avenue that is only a few miles long, along the banks of the Schuylkill River then extends northeast to Wissahickon Avenue. East Falls overlooks the multi-use recreational path of Fairmount Park along Kelly Drive, and is desirable for its central location, an easy commute to Center City, with easy access to several major roadways and public transportation. East Falls continues to develop, with new housing, retail space and recreation centers in production. It features three streets in proximity with the word "Queen" in them (Queen Lane, New Queen Street, and Indian Queen Lane), two train stations, a number of bars and restaurants, a small Korean grocer,

Recently, East Falls has been undergoing redevelopment to elevate its status relative to nearby Manayunk and other local shopping districts in the Philadelphia area. The Arthur Ashe Youth Tennis and Education Center, was recently completed. It offers instruction to Philadelphia youth in its new 9.2-acre (37,000 m2), sixteen-court facility and operates in cooperation with the City of Philadelphia, School District of Philadelphia, and others. It was built with private funding in partnership with the Commonwealth of Pennsylvania.

East Falls is best known as the childhood home of Grace Kelly, actress and Princess of Monaco, who grew up in a house at 3901 Henry Avenue. In addition, former U.S. Senator Arlen Specter, Jewish studies scholar Chaim Potok, Pennsylvania Governor and former Philadelphia Mayor Ed Rendell have homes in East Falls. Ravenhill Academy, a Catholic girls school run by the Mothers of the Assumption from the Philippines, was attended by Grace Kelly and the former President of the Philippines Corazon Aquino. It was closed in 1977 and now is part of the Philadelphia University campus. It is a common misconception that Frank Sinatra exchanged nuptials with his second wife, Ava Gardner, in another campus building, a house on the corner of School House Lane and Henry Avenue.

East Falls was the site of the world-famous Schuylkill Falls Public Housing Project by the International Modern architect Oscar Stonorov. Constructed in 1953, Schuylkill Falls was one of the most admired and studied high-rise public housing designs in the US. Despite its status as a National Historic Landmark, the building stood vacant for many years and was finally demolished in 1996.

The Thomas Mifflin School, Wissahickon, and Woman's Medical College of Pennsylvania are listed on the National Register of Historic Places.

East Falls takes its name from its location on the east side of the Schuylkill Falls along the Schuylkill River at the original line of waterfalls known as the 'Falls of the Schuylkill' where the river descends from the elevation of the Pennsylvania piedmont to the coastal plain occupied by the main part of the City of Philadelphia. Thus East Falls was in colonial and Federalist times the highest point on the river navigable down the river by boat's not driven by a skilled pilot; accordingly the settlement housed a dock and became a transfer point to the Indian path converted into colonial roadways which later became Ridge Avenue and Germantown Avenue.

Before the War of 1812, Josiah White and Erskine Hazard harnessed the water power from the cataracts for a foundry, wire mill and nail manufactory — whose combined energy needs led them to learn how to successfully use anthracite in industrial heating during the war of 1812, caused them to push for the legislation and corporation behind the Schuylkill Canal, then found the Lehigh Coal & Navigation Company and in many respects, bootstrap the American industrial revolution between 1820-1860 by building mines, canals, and railroads, including the first railroad over five miles long and bringing smelting of Anthracite pig iron to the United States.

The falls disappeared when the river level was raised by the construction of the dam at the Fairmount Water Works, four miles downstream, but rocks still visible above the water show the location of the natural fall-line. Before the arrival of European settlers, the Lenni Lenape Indians considered the lower Schuylkill River their home. The Wissahickon Creek runs into the Schuylkill here and today is included as a part of Fairmount Park, providing walking and bike paths along its banks. Wissahickon is a merging of two Lenape words: "Wisaucksickan" meaning "yellow-colored creek", and "Wisamickan" meaning "catfish creek". In the eighteenth and nineteenth centuries "catfish and waffles" was a favorite food at the many inns and taverns that ran through the valley, and a catfish still serves as the weathervane atop the Free Library of Philadelphia Falls of Schuylkill Branch. East Falls, so named in the nineteenth century, had earlier been known as Falls of the Schuylkill or Falls Village. In the 19th century, the Dobson Mills textile factory thrived there.

Note: A detailed early history of East Falls is contained in "Early History of the Falls of Schuylkill, Manayunk, Schuylkill and Lehigh Navigation Companies, Fairmount Waterworks, Etc.", by Charles V. Hagner, in 1869. It was reprinted by the University of Michigan in 2010 as part of its Historical Reprint Series.

All content from Kiddle encyclopedia articles (including the article images and facts) can be freely used under Attribution-ShareAlike license, unless stated otherwise. Cite this article:
East Falls, Philadelphia Facts for Kids. Kiddle Encyclopedia.