Thomas Mifflin (January 10, 1744 – January 20, 1800) was an American merchant, soldier, and politician from Philadelphia, Pennsylvania. He served in a variety of roles during and after the American Revolution, several of which qualify him to be counted among the Founding Fathers. He was the first Governor of Pennsylvania, serving from 1790 to 1799; he was also the last President of Pennsylvania, succeeding Benjamin Franklin and serving from 1788 until 1790.

Mifflin was a delegate to the 1787 Philadelphia Convention and signed the United States Constitution. He then presided over the committee that wrote Pennsylvania's own constitution and he became the first governor after the ratification of the constitution. Mifflin left office as governor in 1799, and died the following year.

Unofficial coat of arms used by family of John Mifflin

In 1760, Thomas Mifflin graduated from the College of Philadelphia (now the University of Pennsylvania) and joined the mercantile business of William Biddle. After returning from a trip to Europe in 1765, he established a commercial business partnership with his brother, George Mifflin.

He married a second cousin, Sarah Morris, on March 4, 1767. They had one child, Emily Mifflin Hopkins.

Military service during the American Revolution 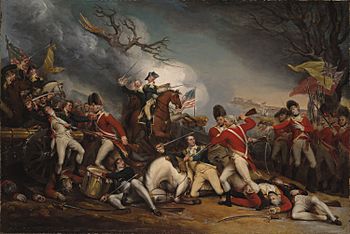 The Death of General Mercer at the Battle of Princeton, January 3, 1777, painting by John Trumbull (Mifflin on far left, leading cavalry charge)

Early in the Revolutionary War, Mifflin left the Continental Congress to serve in the Continental Army. He was commissioned as a major, then became an aide-de-camp of George Washington.

On August 14, 1775, Washington appointed him to become the army's first Quartermaster General, under order of Congress. Although it has been said that he was good at the job despite preferring to be on the front lines, questions were raised regarding his failure to properly supply Washington and the troops at Valley Forge, alleging that he had instead warehoused and sold supplies intended for Valley Forge to the highest bidder. Reportedly, after Washington confronted him about this, Mifflin asked to be relieved as Quartermaster General, but was persuaded to resume those duties because Congress was having difficulty finding a replacement.

In Congress, there was debate regarding whether a national army was more efficient or whether the individual states should maintain their own forces. As a result of this debate the Congressional Board of War was created, on which Mifflin served from 1777 to 1778. He then rejoined the army but took little active role, following criticism of his service as quartermaster general. He was accused of embezzlement and welcomed an inquiry; however, one never took place. He resigned his commission—by then, as a major general—but Congress continued to ask his advice even after accepting his resignation. Mifflin's most important duty as president was to accept on behalf of Congress the resignation of General George Washington on December 23, 1783. After the war, the importance of Congress declined so precipitously that Mifflin found it difficult to convince the states to send enough delegates to Congress to ratify the Treaty of Paris, which finally took place on January 14, 1784 at the Maryland State House in Annapolis. He also appointed Thomas Jefferson as a minister to France on May 7, 1784, and he appointed his former aide, Colonel Josiah Harmar, to be the commander of the First American Regiment.

Mifflin later served as a delegate to the United States Constitutional Convention in 1787. He was a signatory to the Continental Association and the Constitution. He served in the house of Pennsylvania General Assembly (1785–1788). He was a member of the Supreme Executive Council of the Commonwealth of Pennsylvania, and on November 5, 1788, he was elected President of the Council, replacing Benjamin Franklin. He was unanimously reelected to the Presidency on November 11, 1789. He presided over the committee that wrote Pennsylvania's 1790 State Constitution. That document did away with the Executive Council, replacing it with a single governor.

On December 21, 1790, Mifflin became the last President of Pennsylvania and the first Governor of the Commonwealth. He held the latter office until December 17, 1799, when he was succeeded by Thomas McKean. He then returned to the state legislature, where he served until his death the following month. 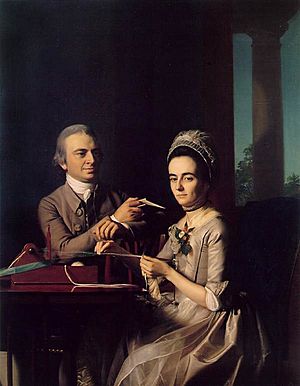 Although Mifflin's family had been Quakers for four generations, he was expelled from the Religious Society of Friends when he joined the Continental Army, because his involvement with the military contradicted that faith's pacifistic doctrines.

Mifflin became a member of the American Philosophical Society in 1768, and served for two years as its secretary.

He served from 1773 to 1791 as a trustee of the College and Academy of Philadelphia (now the University of Pennsylvania), including two years as treasurer (1773–1775).

Mifflin died in Lancaster, Pennsylvania on January 23, 1800. He is interred at Holy Trinity Lutheran Church in Lancaster.

A Commonwealth of Pennsylvania historical marker outside Holy Trinity, dedicated in 1975, commemorates Thomas Wharton and Mifflin, the first and last Presidents of Pennsylvania under the Pennsylvania Constitution of 1776. It reads:

Holy Trinity Lutheran Church. Founded in 1730. A session for an Indian treaty was held in the original church building in 1762. The present edifice was dedicated in 1766. Here are interred the remains of Thomas Wharton (1778) and Gov. Thomas Mifflin (1800).

All content from Kiddle encyclopedia articles (including the article images and facts) can be freely used under Attribution-ShareAlike license, unless stated otherwise. Cite this article:
Thomas Mifflin Facts for Kids. Kiddle Encyclopedia.