Mifflinburg is a borough in Union County, Pennsylvania, United States. The population was 3,594 at the 2000 census.

In 1792, S. Lulis and Catharina Jungman (Youngman) and their two children, came from Fort Augusta (now Sunbury) Pennsylvania to the Buffalo Valley to settle on land given to them by Catharina’s father. They divided the land into 60’ by 120’ plots that were sold to other adventurous settlers, many of them German, and the village of Youngmanstown was formed. A few years later George Rote (Rhoade) laid out a village just east of Youngmanstown, known as Greenville or Rotestown, after George’s death. Eventually, the two settlements merged at Third Street. In 1827 the two villages combined and were incorporated. The combined village was named Mifflinburg, in honor of Thomas Mifflin, the first Governor of Pennsylvania after the 1790 Constitution.

In 1845, George Swentzel set up Mifflinburg's first buggy business. Soon other buggy manufacturers set up their own shops in Mifflinburg, and by 1855, with a population of 800, Mifflinburg hosted thirteen coachmakers. By the 1880s, with more than fifty buggy and sleigh factories, Mifflinburg became known as “Buggy Town” because its buggy makers produced more horse-drawn vehicles per capita than any other town in the state.

The Mifflinburg Historic District, Hassenplug Bridge, and William A. Heiss House and Buggy Shop are listed on the National Register of Historic Places.

There were 1,506 households out of which 32.1% had children under the age of 18 living with them, 55.5% were married couples living together, 9.6% had a female householder with no husband present, and 31.7% were non-families. 27.7% of all households were made up of individuals and 13.7% had someone living alone who was 65 years of age or older. The average household size was 2.39 and the average family size was 2.91. 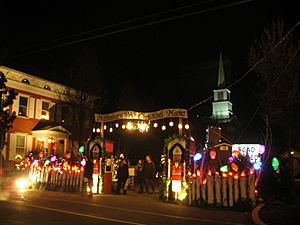 The Mifflinburg Christkindl market in 2012

Major employers include Weis Markets (a supermarket), Mifflinburg Area School District, CVS, Cole's Hardware, Ritz-Craft (a manufacturer of modular homes), and Yorktowne (a cabinetry manufacturer). In 2005 Yorktowne management made the decision to move most of the Mifflinburg operations to Danville, Virginia, rather than comply with new air pollution regulations in Pennsylvania.

Mifflinburg's business district is centered on Pennsylvania Route 45.
U.S. Route 15, the primary north/south highway through central Pennsylvania, is located 9 miles to the east.
The most direct route to the nearest interstate highway exit involves going over Sand Mountain on an unpaved road to reach Interstate 80 exit 192. Most westbound drivers will opt for exit 185 instead. Eastbound drivers will use exit 210.

Mifflinburg was once served by the Lewisburg and Tyrone Railroad. Today, the closest passenger rail access is the Lewistown Amtrak station.

All content from Kiddle encyclopedia articles (including the article images and facts) can be freely used under Attribution-ShareAlike license, unless stated otherwise. Cite this article:
Mifflinburg, Pennsylvania Facts for Kids. Kiddle Encyclopedia.