Mifflintown is a borough in and the county seat of Juniata County, Pennsylvania, United States. The population was 936 at the 2010 census.

According to the United States Census Bureau, the borough has a total area of 0.1 square miles (0.26 km2), all of it land.

There were 372 households, out of which 28.0% had children under the age of 18 living with them, 40.3% were married couples living together, 12.9% had a female householder with no husband present, and 43.5% were non-families. 38.7% of all households were made up of individuals, and 18.8% had someone living alone who was 65 years of age or older. The average household size was 2.24 and the average family size was 2.97.

There is a large Amish and Mennonite population around the borough.

Nevertheless, Mifflintown serves as the corporate headquarters of both The Juniata Valley Bank and First National Bank of Mifflintown. Empire Kosher Poultry, the nation's largest producer of kosher poultry, has both its headquarters and processing facility in adjoining Fermanagh Township. 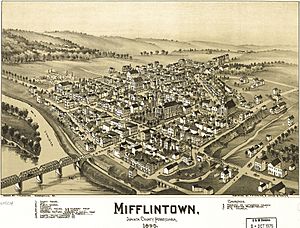 Illustrated map of Mifflintown in 1895

Pennsylvania Route 35, a southwest-northeast highway that serves as Juniata County's principal arterial highway running in that direction, forms the main street of Mifflintown. It intersects the former mainline of US routes 22 and 322, which was moved in the early 1970s to a four-lane bypass lying east of the town. The former Pennsylvania Railroad mainline tracks, now owned by the Norfolk Southern Railway, lie across the Juniata River in the adjoining town of Mifflin.

All content from Kiddle encyclopedia articles (including the article images and facts) can be freely used under Attribution-ShareAlike license, unless stated otherwise. Cite this article:
Mifflintown, Pennsylvania Facts for Kids. Kiddle Encyclopedia.