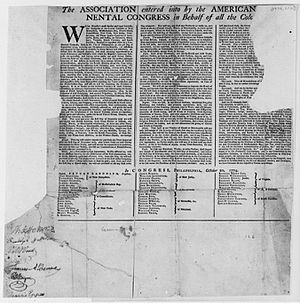 The Association adopted by the Continental Congress was published and often signed by local leaders. Thomas Jefferson, who was not yet a delegate to Congress, signed this copy (lower left) with other Virginians.

The Continental Association, often known simply as the "Association", was a system created by the First Continental Congress in 1774 for implementing a trade boycott with Great Britain. Congress hoped that, by imposing economic sanctions, they would pressure Britain into addressing the grievances of the colonies, in particular repealing the Intolerable Acts passed by Parliament. The Association aimed to alter Britain's policies toward the colonies without severing allegiance.

The boycott began on December 1, 1774. The Association was fairly successful while it lasted. Trade with Britain fell sharply, and the British responded with the New England Restraining Act of 1775. The outbreak of the American Revolutionary War effectively superseded the need to boycott British goods.

All content from Kiddle encyclopedia articles (including the article images and facts) can be freely used under Attribution-ShareAlike license, unless stated otherwise. Cite this article:
Continental Association Facts for Kids. Kiddle Encyclopedia.