The Fairmount Water Works in Philadelphia, Pennsylvania was Philadelphia's second municipal waterworks. Designed in 1812 by Frederick Graff and built between 1812 and 1872, it operated until 1909, winning praise for its design and becoming a popular tourist attraction. It now houses a restaurant and an interpretive center that explains the waterworks' purpose and local watershed history. It was designated a National Historic Landmark in 1976 for its architecture and its engineering innovations. It was the nation's first water supply to use paddle wheels to move water.

Following a series of yellow fever epidemics in the late 18th century (which was at the time thought to be caused by unclean water or by rotting matter in the streets) city leaders appointed a "Watering Committee". The initial water system was designed by Benjamin Latrobe and accepted by the committee in 1799. His system utilized two steam engines (in series) to pump water from the Schuylkill River, into the city, then into two wooden tanks that held a total of just 57,000 US gallons (220,000 l). From the wooden tanks, the water was gravity fed into a series of wooden water mains. The system was plagued with problems. If either of the steam engines failed, the water supply to the city was cut off.

The committee began searching for another solution and eventually picked John Davis and Frederick Graff (Latrobe's apprentice and successor as chief engineer) to design a new waterworks, in order to meet the demand of the increasing numbers of city residents and to solve the problem of inadequate storage capacity.

The Fairmount Water Works was initially constructed between 1812 and 1815 on the east bank of the Schuylkill River. The Water Works initially consisted of a 3 million US gallons (11,000,000 l) earthen reservoir atop Faire Mount (now site of the Philadelphia Museum of Art), and a pump house with two steam engines to pump water. Between 1819 and 1821, a 1,600-foot-long (490 m) dam was built across the Schuylkill to direct water to a Mill House with three water wheels that replaced the steam engines in 1822. Later, Jonval turbines were used to lift the water in a New Mill House and in the renovated Old Mill House.

The facility, the industrial nature of which was disguised by a Classical Revival exterior, became a tourist attraction for its beauty and its location on the riverside. Visitors included Charles Dickens, who praised it for its pleasant design and public usefulness. Another English visitor, Fanny Trollope, in her 1832 book Domestic Manners of the Americans, mentioned the Water Works:

There is one spot, however, about a mile from the town, which presents a lovely scene. The water-works of Philadelphia have not yet perhaps as wide extended fame as those of Marley, but they are not less deserving it. At a most beautiful point of the Schuylkill River the water has been forced up into a magnificent reservoir, ample and elevated enough to send it through the whole city. The vast yet simple machinery by which this is achieved is open to the public, who resort in such numbers to see it, that several evening stages run from Philadelphia to Fair Mount for their accommodation.

Completed in 1822, Fairmount Dam cut diagonally across the river, channeled water into the Waterworks, and acted as a spillway. The Schuylkill is a tidal river, so it also prevented brackish water in the Delaware River from mixing with the fresh water. Above it, the dam created the "Schuylkill Pond", several miles of tranquil water used for recreation. 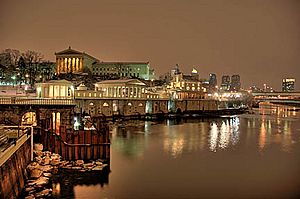 A view at night, also showing the Philadelphia Museum of Art in the background

After the waterworks closed in 1909 the facility was used for several purposes, including the Philadelphia Aquarium (which closed in 1962) and an indoor swimming pool which closed in 1973. In more recent years attempts have been made to return the waterworks to its previous position as an engaging tourist attraction. Despite a severe fire which caused setbacks to the restoration, an interpretive center has now been added and tours are regularly given. Its position near Boathouse Row and the Philadelphia Museum of Art is hoped to aid in making it a regularly visited tourist site once more.

In December 2004, Michael Karloutsos won a 25-year, $120,000/year lease with the Fairmount Park Commission. After a highly publicized renovation, Karloutsos opened Water Works Restaurant and Lounge within the Water Works on July 20, 2006.

All content from Kiddle encyclopedia articles (including the article images and facts) can be freely used under Attribution-ShareAlike license, unless stated otherwise. Cite this article:
Fairmount Water Works Facts for Kids. Kiddle Encyclopedia.