Boathouse Row is a historic site located in Philadelphia, Pennsylvania, on the east bank of the Schuylkill River, just north of the Fairmount Water Works and the Philadelphia Museum of Art. It consists of a row of 15 boathouses housing social and rowing clubs and their racing shells. Each of the boathouses has its own history, and all have addresses on both Boathouse Row and Kelly Drive (named after famous Philadelphia oarsman John B. Kelly Jr.).

Boathouses #2 through #14 are part of a group known as the Schuylkill Navy, which encompasses several other boathouses along the river. Boathouse #1 is Lloyd Hall and is the only public boathouse facility on the Row. Boathouse #15 houses the Sedgeley Club, which operates the Turtle Rock Lighthouse. The boathouses are all at least a century old, and some were built over 150 years ago.

The boathouses are seen as centers of the rowing community around the United States. Rowers from the boathouses compete at every level, including local clubs, high schools, colleges, summer racing programs, and international-level athletics. 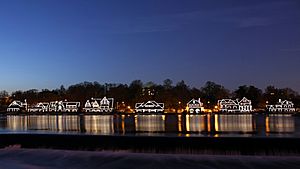 In 1979, lights designed by architectural lighting designer Ray Grenald were installed to outline each of the boathouses, giving them a nightly Christmas-like gingerbread house appearance and reflecting in the Schuylkill River. He proposed the lights after hearing talk of destroying the decaying Victorian boathouses. Lights on the buildings at night would serve to make them more noticed and appreciated. In 2005, after two refurbishings, the houses were outfitted with computerized LEDs that can light up in various colors, depending on the event or season.

Boathouse Row is a National Historic Landmark and was listed on the National Register of Historic Places in 1987.

Local universities including Drexel, Penn, and La Salle row out of houses on Boathouse Row. Temple and Saint Joseph's row out of other boathouses along the Schuylkill that are not part of the Row.

The history of Boathouse Row begins with the construction of the Fairmount Dam and the adjacent water works. The Dam was built in 1821 to keep brackish tidal waters from entering the city's water supply through the Fairmount Water Works, which had been completed in 1815. The Lehigh Coal & Navigation Company would become heavily involved in the improvements. The dam initially submerged the rapids, and later developments transformed the stretch of the Schuylkill between the dam and East Falls from a tidal river into a slack water river resembling a very long freshwater lake. The placid man-made surface was ideal for ice skating in winter and rowing in summer. In 1835, the first regatta took place between the Blue Devils and the Imps Barge clubs. The excitement from the race sparked the formation of several barge clubs, many of them short-lived. 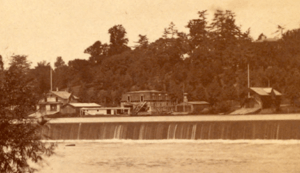 A secondary effect of taming the Schuylkill was that the calm water provided a breeding ground for mosquitoes, which drove wealthy residents from their riverside mansions. The abandoned estates were bought by the City of Philadelphia. In 1844, the City purchased the Lemon Hill Estate. The leaseholder of Lemon Hill operated a beer garden and allowed rowing and barge clubs to build frame structure boathouses on the Estate's property along the Schuylkill.

In 1855, the City founded Fairmount Park by converting the Lemon Hill Estate, upon which the frame boathouses were built, into a public park. At the same time, some of the established clubs wanted to regulate the sport of rowing to prevent unscrupulous practices and fixed races. As a result, in 1858, the Schuylkill Navy was founded, which eventually transformed the professional sport of rowing into an amateur sport. In 1859, the City condemned the boathouses along the Schuylkill.

Although the City condemned the frame boathouses, it passed an ordinance in 1860 to permit construction of three new boathouses for Pacific Barge Club, the clubs of the Schuylkill Navy, and the Philadelphia Skating Club. After 1860, without city approval, several clubs constructed one-story boathouses similar to the frame structures that the City had previously condemned and removed, but these newer boathouses were built with brick and stone. In 1868, following an expansion of Fairmount Park, the City ordered the removal of all of the one-story brick and stone boathouses except for buildings belonging to the Philadelphia Skating Club (#14 Boathouse Row), Pacific Barge Club (#2-3 Boathouse Row), and Bachelors Barge Club (#6). 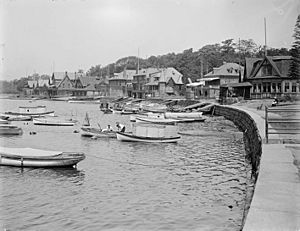 All content from Kiddle encyclopedia articles (including the article images and facts) can be freely used under Attribution-ShareAlike license, unless stated otherwise. Cite this article:
Boathouse Row Facts for Kids. Kiddle Encyclopedia.