Hog Island is the historic name of an area southeast of Tinicum Township, Pennsylvania along the Delaware River, to the west of the mouth of the Schuylkill River. Philadelphia International Airport now sits on the land that was once Hog Island.

European settlers purchased Hog Island from the Lenape (Delaware) tribe in 1680. The settlers gradually developed the island by building log and earthwork dikes to minimize storm damage and convert the marshes into good grazing meadows. Hog Island supposedly got its name from the pigs which local residents left to roam free, as no fencing was needed. 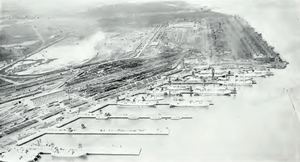 In 1917, as part of the World War I effort, the US government contracted American International Shipbuilding to build ships and a shipyard at Hog Island. At the time Hog Island was the largest shipyard in the world, with 50 slipways. The first ship (named SS Quistconck for the Lenape name for the site) was christened August 5, 1918, by Edith Bolling Wilson, wife of US president Woodrow Wilson. The shipbuilding process practiced on Hog Island was an early experiment in standardized construction of ships. The ships built there, known as "Hog Islanders", were considered ugly but well built. In all, 122 Hog Islanders were built, mostly cargo ships, and a few troop transport ships. The shipbuilding continued until 1921, after which the facility was rapidly demolished. None of the ships were ready in time to participate in World War I, but many of them were involved in World War II. Two of the locomotive steam gantry cranes were sold as surplus to the city of Trenton, New Jersey, where they remain today as the Hog Island Cranes, listed on the National Register of Historic Places. Another crane, a 20-ton Industrial locomotive crane, was sold to the Hyde, McFarlan & Burke contracting company.

The US Army Corps of Engineers filled in the creek separating Hog Island from the mainland with silt dredged out of the shipping channels so that Hog Island became part of the mainland. Starting in 1925, the Pennsylvania Air National Guard used a small part of Hog Island as a training field for its pilots. In 1927, the site was dedicated as the "Philadelphia Municipal Airport" by Charles Lindbergh, who flew in on the Spirit of Saint Louis. In 1930 the city of Philadelphia purchased Hog Island from the federal government for $3 million, in order to expand the airport. Because of the Great Depression, work on the airport did not actually begin until 1937, and the airport was formally opened as Philadelphia Municipal Airport on June 20, 1940.

One legend of the origin of the hoagie sandwich is tied to Hog Island. Domenic Vitiello, professor of Urban Studies at the University of Pennsylvania, asserts that Italians working on Hog Island in the old Navy Yard introduced the sandwich, by putting various meat, cheese, and lettuce between two slices of bread. This became known as the "Hog Island" sandwich; hence, the "hoagie".

All content from Kiddle encyclopedia articles (including the article images and facts) can be freely used under Attribution-ShareAlike license, unless stated otherwise. Cite this article:
Hog Island, Philadelphia Facts for Kids. Kiddle Encyclopedia.