According to some sources, the neighborhood is generally known for low income housing with household incomes generally below the poverty level. The area has many dilapidated or abandoned houses. 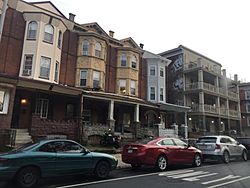 Houses in the Dunlap neighborhood

The area is served by SEPTA's 52nd Street station.

All content from Kiddle encyclopedia articles (including the article images and facts) can be freely used under Attribution-ShareAlike license, unless stated otherwise. Cite this article:
Dunlap, Philadelphia Facts for Kids. Kiddle Encyclopedia.