Traditionally, Kensington is known for its large working class Irish Catholic community. Kensington was the location of the Philadelphia Nativist Riots in the 19th century. Kensington is also the birthplace of the K&A Gang, (currently known as the Northeast Philly Irish Mob), an Irish American organized crime network. Kensington was also home to a large, and largely invisible, English American community. For example the five Episcopal parishes in the neighborhood (Emmanuel, Free Church of St. John, Good Shepherd, St. Ambrose, St. Luke's, and St. Nathanael's) were founded by 19th century immigrants from England.

Along with Irish Americans, Kensington is also home to a large population of Hispanic Americans (mainly Puerto Ricans), African Americans, Polish Americans, and Italian Americans. The neighborhood has also recently seen a large influx of young urban professionals and gentrification.

Generally accepted boundaries are the triangular area bounded by Erie Avenue to the north, Front Street (and sometimes Fifth Street) to the West and Trenton Avenue to the East. While others say it's bounded by Kensington Avenue to north, Aramingo Avenue to the south, Lehigh Avenue to the west, and Castor Avenue to east. Within these boundaries, sub-neighborhoods include East Kensington, Harrowgate, Lower Kensington, West Kensington, Fishtown, and Olde Richmond. Due to colloquial changes in the boundaries of the area since the Act of Consolidation, 1854, no clear definition is possible. The Greater Kensington area of the city roughly coincides with the former Kensington District, Richmond District, Aramingo Borough and Northern Liberties Township. Since incorporation into the City of Philadelphia (see Act of Consolidation, 1854), these areas have evolved over time to include portions of the modern "Kensington". The area is just a couple of miles northeast of Center City and just to the West of the Port Richmond neighborhood. Bordering neighborhoods include West Kensington to the west, Olde Kensington and Fishtown to the south, Olde Richmond and Port Richmond to the east, and Harrowgate to the north. 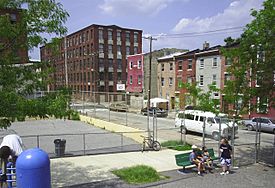 Playground in the neighborhood of Kensington, Philadelphia. Note the factories in the background, one of which has been recently converted into the Coral Street Arts House, low-income housing for artists.

Kensington was founded by Anthony Palmer around 1732. Palmer purchased what was called the Fairman Estate, located along the Delaware River in the Northern Liberties (area just North of the City of Philadelphia) The entire estate consisted of 191.5 acres of land, much smaller than the Kensington we know of today. Palmer was an English merchant, who came to Philadelphia very early in the 18th century, from Barbados. The town of Kensington was named for the area in London known as Kensington Gardens. Palmer laid out his town and sold parcels to the many people who worked along the Delaware River, in the fishing industry and many ship building yards. The original area of Kensington is now more commonly called "Fishtown" mainly because of the Shad Fishing that was the dominant business in Kensington in the 18th and 19th centuries. Anthony Palmer was very active in local government and was part of the Philadelphia council. As head of council, Palmer became the acting Provincial Governor of Pennsylvania in 1747 and 1748. Palmer died in 1749 and is buried in Christ Church Burial Grounds in Old City section of Philadelphia.

Kensington has traditionally been known as the working class center of Philadelphia. Initially, employment focused around the nearby waterfront, and the activities of fishermen and ship- and boat-builders. In the early 19th century, Kensington transitioned to iron and steel manufacture, and became home to a variety of factories, potteries, and machine works. In the later 19th century, Kensington became one of the leading centers of the textile industry, particularly in carpet manufacture. McNeil Laboratories began with the purchase of a pharmacy in the area in 1879 by the company's namesake. In 1903 Mother Jones organized a "Children's Crusade" of children from the local mills and mines to protest against child labor. They marched from Kensington to Oyster Bay, New York, carrying banners demanding "We want to go to School and not the mines!"

Deindustrialization eventually took its hold on the neighborhood in the 1950s, leading to a significant population loss, high unemployment, economic decline, and the abandoning of homes in the neighborhood. However, some sections of the neighborhood have been revitalized in recent years, especially those near Frankford Avenue, Kensington's neighbor north of Lehigh Avenue, and Fishtown, an area of Kensington where many Shad fisheries were located, another traditionally working-class neighborhood which has seen rents increase. While most of the large manufacturers have left, the area has many small shops and large renovated factories and warehouses for newer artisans to set up shop.

All content from Kiddle encyclopedia articles (including the article images and facts) can be freely used under Attribution-ShareAlike license, unless stated otherwise. Cite this article:
Kensington, Philadelphia Facts for Kids. Kiddle Encyclopedia.