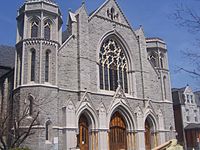 Spruce Hill is a neighborhood in the University City section of West Philadelphia. It is between 40th and 46th streets, and it stretches from Market Street south to Woodland Avenue. With a population of over 16,000, it is a racially and ethnically diverse part of the city where much historic architecture is preserved. The neighborhood contains a large number of Victorian rowhouses, many of which have been converted to multi-family apartments.

It was built as a streetcar suburb for Center City between 1850 and 1910. Among its most prominent developers was financier Clarence Howard Clark Sr. (1833 – 1906), who built dozens of rowhouses, donated land for the Walnut Street West Branch of the Free Library of Philadelphia, settled a tax assessment by founding the 9.1-acre Clark Park, and established his mansion on the grassy block that today holds the Penn Alexander public elementary school. 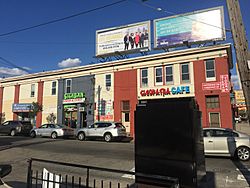 Ethnic restaurants on 42nd and Chestnut

A statue of Charles Dickens, cast in 1890 by Francis Edwin Elwell, stands in Clark Park; it is one of just two known statues of the author.

The School District of Philadelphia operates Penn Alexander School and the Paul Robeson High School for Human Services. The Spruce Hill Christian elementary and middle school is on Baltimore Avenue. The University of Pennsylvania campus extends into Spruce Hill and the University of the Sciences campus is also in the neighborhood. 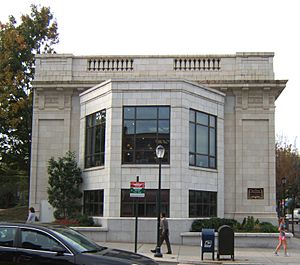 All content from Kiddle encyclopedia articles (including the article images and facts) can be freely used under Attribution-ShareAlike license, unless stated otherwise. Cite this article:
Spruce Hill, Philadelphia Facts for Kids. Kiddle Encyclopedia.