Poplar is a neighborhood in Lower North Philadelphia. It is located north of Callowhill, between Spring Garden/Fairmount and Northern Liberties, bounded roughly by Girard Avenue to the north, North Broad Street to the west, Spring Garden Street to the south, and 5th Street to the east. The neighborhood is mostly residential with commercial frontage on Broad Street and Girard Avenue and some industrial facilities to the west of the railroad tracks along Percy St. and 9th St. 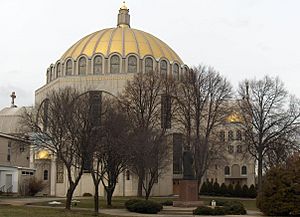 While most of Poplar's original housing has been demolished, a handful of defining structures identify the neighborhood and can be seen from various points both in the neighborhood and around the city. The ornate, Victorian Divine Lorraine Hotel fronts on North Broad Street at its intersection with Fairmount Street; the massive, former Strawbridge & Clothier warehouse is located at 9th and Poplar Streets adjacent to the SEPTA elevated line (with the expanded building occupying almost the entire space between Poplar and Girard), and two 1920s-1930s public school buildings (Spring Garden School No. 1 and Spring Garden School, the latter formerly Spring Garden School No. 2) constructed in a Moderne/Art Deco style, designed by noted Philadelphia school architect Irwin Catharine, are located on 12th St. With the exception of the southernmost of the two schools, which remains in use, the rest of the older landmarks remain vacant. The Divine Lorraine Hotel and the two schools are listed on the National Register of Historic Places along with the Thaddeus Stevens School of Observation, Rodeph Shalom Synagogue, and Mary Channing Wister School.

The Ukrainian Catholic Cathedral of the Immaculate Conception is at 830 North Franklin Street. It was built in 1966 and designed by Julian K. Jastremsky. 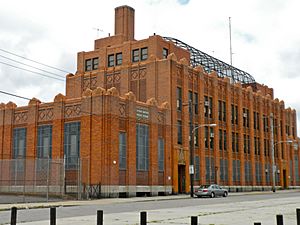 Residents are zoned to the School District of Philadelphia. Zoned schools include:

All content from Kiddle encyclopedia articles (including the article images and facts) can be freely used under Attribution-ShareAlike license, unless stated otherwise. Cite this article:
Poplar, Philadelphia Facts for Kids. Kiddle Encyclopedia.