Bridesburg is the northernmost neighborhood in the River Wards section of Philadelphia, Pennsylvania, United States. Bridesburg is an historically German and Irish community, with a significant community of Polish immigrants who arrived mostly in the early- to mid-twentieth century. The community is home to two Catholic churches: All Saints Church, designed by Edwin Forrest Durang, built in 1889; and Saint John Cantius Church, built some time after 1892 in Polish Cathedral style.

The 19137 ZIP Code, of which Bridesburg forms the major part, extends as far to the southwest as Castor Avenue, and includes some area to the northwest of I-95 and the original course of Frankford Creek. A small portion of Bridesburg (also 19137) is situated directly next to the 19124 ZIP code known as Frankford.

Before the arrival of Europeans, the Lenni Lenape Indians inhabited the region. Explorer Henry Hudson in 1609 was the first European to set foot in this region, and based on his findings these Indians were considered to be the first inhabitants of the area.

In 1638, the Swedes bought land east of the Delaware River from the Indians and named it New Sweden. The Swedes lived with the Indians on friendly terms. By 1645 the Swedes had expanded to the Northeast of modern-day Philadelphia, and in 1647 the Dutch arrived. But it was not until the 1680s when the English came with William Penn that the area was actually developed. After 1750, Germans then settled the area, particularly in Bridesburg and Frankford.

Founded in the early 19th century, Bridesburg, a tract of land formerly belonging to Point-no-Point, took its name from Joseph Kirkbride, who for many years owned land there and was proprietor of a ferry over Frankford Creek, and to whom the Legislature gave the right to build a bridge and receive toll for passage over the same by act of March 20, 1811. On April 1, 1833, Philadelphia County bought the Kirkbride bridge and two-and-a-half acres of land annexed for $5,500. Kirkbridesburg was considered too long a name for convenience, and the shorter "Bridesburg" was adopted. Bridesburg was incorporated as a borough on April 1, 1848. In 1854, the borough was annexed to the city of Philadelphia in the Act of Consolidation.

The region was known in Colonial times as Point-no-Point, due to the deceptive appearance of the blunt cape at the mouth of Frankford Creek. When first seen going northward it appeared to be a point, sharply jutting into the stream, but upon approaching, it lost its character and seemed to be an ordinary portion of the right bank; on further approach it seemed to again jut out into a point.

Point look out, point look in,
Point no Point, and point ag'in.

Many famous personalities in history have passed through the lands of Point-no-Point. The second President of the United States wrote a letter to his wife Abigail describing his travels in Point-no-Point.

The road to Point-no-point lies along the river Delaware, in fair sight of it and its opposite shore. For near four miles the road is as strait as the streets of Philadelphia. On each side, are beautiful rows of trees, buttonwoods, oaks, walnuts, cherries and willows, especially down towards the banks of the river. The meadows, pastures and grass plats are as green as leeks. There are many fruit trees and fine orchards set with the nicest regularity. But the fields of grain, the rye and wheat exceed all description. These fields are all sown in ridges and the furrow between each couple of ridges is as plainly to be seen as if a swath had been mown along. Yet it is no wider than a ploughshare and it is as strait as an arrow. It looks as if the sower had gone along the furrow with his spectacles to pick up every grain that should accidentally fall into it. The corn is just coming out of the ground. The furrows struck out for the hills to be planted in, are each way as straight, as mathematical right lines ; and the squares between every four hills as exact as they could be done by plumb and line, or scale and compass. 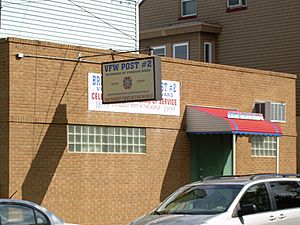 Bridesburg was incorporated as a borough on April 1, 1848; it included the peninsula between the lower Frankford Creek and the Delaware River, and beyond Richmond district, the boundary lying near the projected line of Pike street, not far from Wheat Sheaf Lane.

It was first called Kirkbridesburg, for Joseph Kirkbride, who operated a ferry to New Jersey, and in 1811 built a toll bridge at Bridge street over Frankford Creek. About one-hundred forty years ago, the villagers decided the name was too long, and shortened it to Bridesburg. In 1854, the borough was annexed to the city of Philadelphia in the Act of Consolidation.

Bridesburg is home to the second oldest VFW Post in the world, founded in 1899.

For its size, Bridesburg is the home of a large number of churches:

All content from Kiddle encyclopedia articles (including the article images and facts) can be freely used under Attribution-ShareAlike license, unless stated otherwise. Cite this article:
Bridesburg, Philadelphia Facts for Kids. Kiddle Encyclopedia.