Holmesburg is a neighborhood in the Northeast section of Philadelphia, Pennsylvania. Holmesburg was named for the descendants of John Holme (1632–1704) who immigrated to Philadelphia in the 1680s and had no known relation to Surveyor General Thomas Holme. John Holme's descendants acquired land in Lower Dublin, north and south of Frankford Avenue and west of the Pennypack Creek. At the turn of the 19th century they began selling numerous small parcels of their holdings in what became a real estate boom. Also at this time, John Holme, the great grandson of the first John Holme, renamed his lumber yard the Holmesburg Lumber Yard. This renaming coupled with the multitude of Holme family real estate transactions identified this area as 'Holmesburg', the title surviving more than two hundred years later.

It is bordered by Roosevelt Boulevard to the west, the Delaware River to the east, and Cottman avenue to the south. The border shared with Torresdale to the north is often subject to conversation, with answers ranging as far north as Academy Road and as far south as Pennypack Creek. Holmesburg uses 19136 as its zip code.

Holmesburg is the birthplace or residence of some of famous Americans, including Stephen Decatur (War of 1812 Naval commander), .

Holmesburg contains one of the longest continuous African-American communities in the nation, having been founded by runaway slaves prior to and during the Civil War.

Holmesburg is the location of the historic Pennypack Theatre building, built in 1929 in the Art Deco style with a 1,364-seat capacity and designed by acclaimed 20th century theater architect William Harold Lee.

The Frankford Avenue Bridge and Joseph H. Brown School were added to the National Register of Historic Places in 1988. 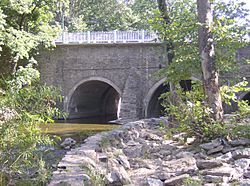 Transportation to Center City Philadelphia is provided by SEPTA's Trenton Line commuter train, which affords a quick 25-minute ride into the urban center. Interstate 95 is also an easy 10-15 minute drive into downtown, accessible either by the Cottman Avenue (PA-73) entrance to the south or Academy Road entrance to the north.

Holmesburg's main thoroughfare, Frankford Avenue (U.S. Route 13), is a historic byway in use for centuries. Frankford Avenue was used as a route from Philadelphia to points north as far back as the 17th century. The Frankford Avenue Bridge across Pennypack Creek, built in 1697, is the oldest stone arch bridge in continuous use in the country.

Holmesburg in print and film

All content from Kiddle encyclopedia articles (including the article images and facts) can be freely used under Attribution-ShareAlike license, unless stated otherwise. Cite this article:
Holmesburg, Philadelphia Facts for Kids. Kiddle Encyclopedia.