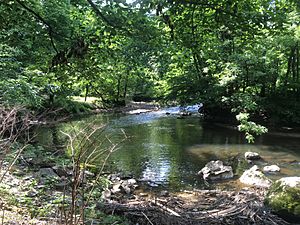 Pennypack Park is a municipal park, part of the Philadelphia Parks & Recreation system, in Northeast Philadelphia in the U.S. state of Pennsylvania. Established in 1905 by ordinance of the City of Philadelphia, it includes about 1,600 acres (6 km2) of woodlands, meadows and wetlands. The Pennypack Creek runs through the park from Pine Road to the Delaware River. The park has playgrounds, hiking and bike trails, and bridle paths for horseback riding. An adjunct to the park is the Pennypack Environmental Center on Verree Road.

Many historic structures remain intact throughout Pennypack Park. Built in 1697, the King's Highway Bridge at Frankford Avenue is the oldest stone bridge still in use in the United States. Pennepack Baptist Church, another of the park's historic sites, was chartered in 1688. During the American Revolutionary War The Verree House on Verree Road was the site of a raid by British troops. The trained eye can rediscover abandoned railroad grades, remnants of early mills, mill races and other reminders that generations of mankind have gathered in the "Green Heart" of Northeast Philadelphia.

All content from Kiddle encyclopedia articles (including the article images and facts) can be freely used under Attribution-ShareAlike license, unless stated otherwise. Cite this article:
Pennypack Park Facts for Kids. Kiddle Encyclopedia.