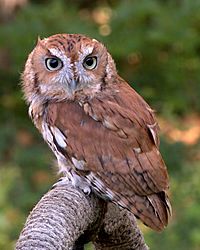 Screech owls or screech-owls are typical owls (Strigidae) belonging to the genus Megascops. Twenty-four living species are known currently. New ones are frequently found and unknown ones are still being discovered on a regular basis, especially in the Andes.

Screech owls are not seen in the Americas. Some species formerly placed with them are nowadays considered more distinct. The common name "screech owl" is sometimes used for the not closely related barn owl as well.

All content from Kiddle encyclopedia articles (including the article images and facts) can be freely used under Attribution-ShareAlike license, unless stated otherwise. Cite this article:
Screech owl Facts for Kids. Kiddle Encyclopedia.