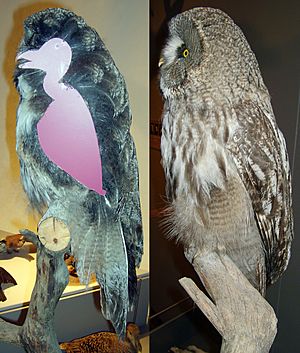 True owls (or 'Typical owls') are owls of the family Strigidae.

They are one of the two families of owls, with 189 living species in 25 genera. The other family is the barn owls. True owls are found on every continent except Antarctica.

The division of owls into these two groups is quite ancient. The relationships of the owls in general are still unresolved.

Typical owls vary greatly in size. The smallest is the Elf owl. Its weight is a hundred times less than the largest, the Eurasian Eagle owl and Blakiston's Fish owl. Most owls have very similar bodies. They have large heads, short tails, and round facial circles around the eyes. Most live in trees (with a few exceptions like the Burrowing owl) and get their food on the wing. The wings are large, broad, rounded and long. Like other birds of prey many owls have females that are larger than males.

They are nocturnal. Because of this the plumage is not much different between males and females. The feathers are soft and the base of each is downy. This give them silent flight. Hearing in owls is highly sensitive. The ears are asymmetrical which lets the owl localise a sound. Owls have massive eyes relative to their body size.

All content from Kiddle encyclopedia articles (including the article images and facts) can be freely used under Attribution-ShareAlike license, unless stated otherwise. Cite this article:
True owl Facts for Kids. Kiddle Encyclopedia.