Kids Encyclopedia Facts
This page is about the toy manufactured by Wham-O. For other highly resilient balls, see bouncy ball. For the championship game, see Super Bowl. 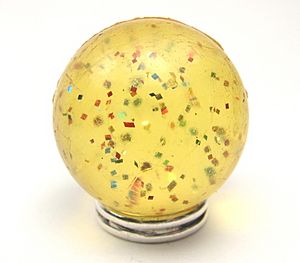 A Super Ball containing particles of glitter, resting on a base. The transparent rubber has yellowed with age.

A Super Ball or Superball is a toy bouncy ball based on a type of synthetic rubber invented in 1964 by chemist Norman Stingley. It is an extremely elastic ball made of Zectron which contains the synthetic polymer polybutadiene as well as hydrated silica, zinc oxide, stearic acid, and other ingredients. This compound is vulcanized with sulfur at a temperature of 165 °C (329 °F) and formed at a pressure of 3,500 psi (24 MPa). The resulting Super Ball has a very high coefficient of restitution, and if dropped from shoulder level on a hard surface, a Super Ball bounces nearly all the way back; thrown down onto a hard surface by an average adult, it can fly over a three-story building.

According to one study "If a pen is stuck in a hard rubber ball and dropped from a certain height, the pen may bounce to several times that height." If a Super Ball is dropped without spin onto a hard surface, with a small ball bearing on top of the Super Ball, the bearing rebounds to a great height.

The "rough" nature of a Super Ball makes its impact characteristics different from otherwise similar smooth balls. The resulting behavior is quite complex. The Super Ball has been used as an illustration of the principle of Time Reversal Invariance.

A Super Ball is observed to reverse the direction of spin on each bounce. This effect depends on the tangential compliance and frictional effect in the collision. It cannot be explained by rigid body impact theory, and would not occur were the ball perfectly rigid. Tangential compliance is the degree to which one body clings to rather than slips over another at the point of impact.

All content from Kiddle encyclopedia articles (including the article images and facts) can be freely used under Attribution-ShareAlike license, unless stated otherwise. Cite this article:
Super Ball Facts for Kids. Kiddle Encyclopedia.