Upper Montclair is a census-designated place (CDP), unincorporated community and neighborhood within Montclair in Essex County, New Jersey, United States. As of the 2010 United States Census, the population for the CDP was 11,565. The area is served as United States Postal Service ZIP code 07043. It is often misperceived, even by Montclair residents, to be a separate municipality from Montclair, perhaps aided by this postal designation.

The area now known as Upper Montclair was first developed in the early 18th century as a rural community known as Speertown, named for John Speer, an early Dutch settler. The area remained a rural hamlet for much of that century. The modern township of Montclair, including Upper Montclair, was incorporated in 1868 from part of Bloomfield Township.

There were 4,178 households out of which 44.2% had children under the age of 18 living with them, 64.8% were married couples living together, 7.9% had a female householder with no husband present, and 24.7% were non-families. 20.3% of all households were made up of individuals, and 8.3% had someone living alone who was 65 years of age or older. The average household size was 2.76 and the average family size was 3.23. 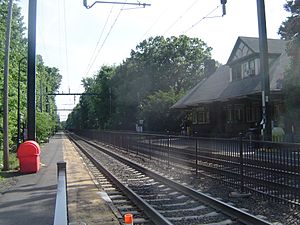 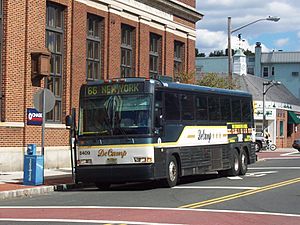 The area is also on NJ Transit's bus route 28, which goes from Montclair State University or Willowbrook Mall along Valley Road through Montclair, Glen Ridge and Bloomfield, to Downtown Newark. This bus route goes along Valley road for the great majority of its path in Upper Montclair, in some places on the route of Decamp's Number 66. Also, two DeCamp Bus Lines routes take commuters to the Port Authority Bus Terminal in New York. Some Number 33 buses go along Grove Street, on the Eastern side of the neighborhood, while number 66 goes on Valley Road, in the West, then the central Park Street.

Upper Montclair has road connections to the rest of Montclair, Cedar Grove, Little Falls, Clifton, and Bloomfield. Just north of the neighborhood's border are U.S. Route 46 and New Jersey Route 3.

All content from Kiddle encyclopedia articles (including the article images and facts) can be freely used under Attribution-ShareAlike license, unless stated otherwise. Cite this article:
Upper Montclair, New Jersey Facts for Kids. Kiddle Encyclopedia.