Glen Ridge was incorporated as a borough by an act of the New Jersey Legislature on February 13, 1895, from portions of Bloomfield Township, based on the results of a referendum held the previous day. In 1982, the borough's official name was changed to "Township of Glen Ridge Borough". Glen Ridge was one of more than a dozen Essex County municipalities to reclassify themselves as townships to take advantage of federal revenue sharing policies that allocated townships a greater share of government aid on a per capita basis. Effective May 1993, the borough's original name of "Glen Ridge Borough" was restored. The borough's name comes from the ridge formed by Toney's Brook.

Of the many legacies left to the town by its founders, the one that has become its trademark is the gas lamps. With only 3,000 gaslights remaining in operation in the entire United States, Glen Ridge has 665 such lamps lighting its streets. In 1924, Glen Ridge became the first municipality in New Jersey to establish a zoning ordinance.

In 2010, Glen Ridge was ranked as the 38th Best Place to live by New Jersey Monthly magazine.

Glen Ridge traces its beginning to 1666 when 64 Connecticut families led by Robert Treat bought land from the Lenni Lenape Native Americans and named it New Ark to reflect a covenant to worship freely without persecution. The territory included the future towns of Bloomfield, Montclair, Belleville and Nutley. When Bloomfield was established in 1812, Glen Ridge was a section "on the hill" composed mostly of farms and woodlands with the exception of a thriving industrial area along Toney's Brook in the glen. For most of the nineteenth century, three water-powered mills produced lumber, calico, pasteboard boxes and brass fittings. A copper mine and a sandstone quarry were nearby.

With the arrival of the Newark and Bloomfield Railroad in 1856 and the construction of the Glen Ridge station and the New York and Greenwood Lake Railway station at today's Benson Street in 1872, Glen Ridge began its transition to a suburban residential community. Stately homes slowly replaced orchards and wooded fields.

Residents "on the hill" became unhappy with their representation on the Bloomfield Council. In spite of repeated requests to Bloomfield officials, roads remained unpaved, water and sewer systems were nonexistent, and schools were miles away. Area residents marked out the boundaries of a 1.45-square-mile (3.8 km2) area to secede from the adjoining town. At the election held on February 12, 1895, the decision to secede passed by only 23 votes. Robert Rudd was elected the first mayor of Glen Ridge.

Glen Ridge is a maximum of six blocks wide and in "the Panhandle" north of Bay Avenue it is only three or two blocks wide.

Glen Ridge has a temperate climate, with warm / hot humid summers and cool / cold winters, according to the Köppen climate classification humid subtropical climate. The town gets an average of 49 inches of rain per year and 20 inches of snowfall, compared to the US averages of 37 and 25 inches. Glen Ridge has 124 days of measurable precipitation a year.

There are typically about 205 sunny days per year in Glen Ridge. The temperature ranges from a high around 86 degrees in July and a low around 21 degrees in January. The comfort index for the town is 47 out of 100, compared to a national average of 44 (with higher numbers being more comfortable).

There were 2,476 households out of which 49.9% had children under the age of 18 living with them, 70.9% were married couples living together, 9.1% had a female householder with no husband present, and 17.9% were non-families. 14.9% of all households were made up of individuals, and 6.7% had someone living alone who was 65 years of age or older. The average household size was 3.03 and the average family size was 3.39.

Glen Ridge is located conveniently in an area where various modes of transportation exist. Approximately half of the residents in Glen Ridge own two or more cars which allows them to access the New Jersey Turnpike, Newark Airport, the George Washington Bridge, and the Lincoln and Holland tunnels through major roads such as Interstate 80, Interstate 280, the Garden State Parkway, U.S. Route 46, Route 3 and Route 21.

NJ Transit provides bus service to Newark on the 11, 28 and 29. Buses from DeCamp Bus Lines run to and from the Port Authority Bus Terminal in Midtown Manhattan.

Commuters can also take trains from the Glen Ridge station (formerly named Ridgewood Avenue), where NJ Transit provides service to Penn Station in Midtown Manhattan and to Hoboken Terminal via the Montclair-Boonton Line.

The town has a jitney service which provides transportation to and from the Glen Ridge Station for commuters. This service has a fee and is only available between certain hours in the day. The Freeman Parkway Bridge crosses over the railroad. 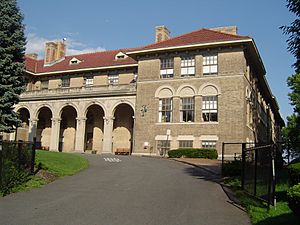 The high school was the 12th-ranked public high school in New Jersey out of 328 schools statewide in New Jersey Monthly magazine's September 2012 cover story on the state's "Top Public High Schools", after being ranked 4th in 2010 out of 322 schools listed.

People who were born in, residents of, or otherwise closely associated with Glen Ridge include:

All content from Kiddle encyclopedia articles (including the article images and facts) can be freely used under Attribution-ShareAlike license, unless stated otherwise. Cite this article:
Glen Ridge, New Jersey Facts for Kids. Kiddle Encyclopedia.