East Orange shares borders with Newark to the east and south, South Orange to the southwest, Orange to the west, and Glen Ridge and Bloomfield to the north.

Unincorporated communities, localities and place names located partially or completely within the city include Ampere and Brick Church. 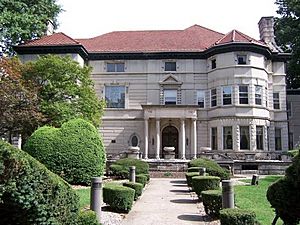 A reminder of East Orange's former wealth. The Ambrose-Ward Mansion was built in 1898 for a book manufacturer, now the home of the African-American Fund of New Jersey

East Orange lies at the intersection of the Garden State Parkway and Interstate 280.

The Garden State Parkway passes through the city, connecting Newark in the south to Bloomfield in the north. The Parkway is accessible at Interchange 145 for Interstate 280 and at Interchange 147 for Springdale Avenue.

New Jersey Transit also runs two commuter rail train stations in East Orange, both located along the Morris & Essex Lines. The East Orange Station is found beside the westbound lanes of Interstate 280, directly across its parking lot from East Orange City Hall. Just one mile west up Main Street is Brick Church Station, the city's second rail stop and the more heavily used of the two. Both have seven-day service to Hoboken Terminal as well as Midtown Direct service to New York Penn Station in Midtown Manhattan.

The city is 7.8 miles (12.6 km) from Newark Liberty International Airport in the nearby cities of Newark and Elizabeth.

East Orange is a sister city of: 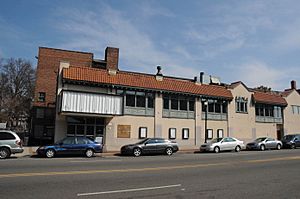 Portions of the city are part of an Urban Enterprise Zone (UEZ), one of 32 zones covering 37 municipalities statewide. East Orange was selected in 1996 as one of a group of seven zones added to participate in the program. In addition to other benefits to encourage employment and investment within the UEZ, shoppers can take advantage of a reduced 3.3125% sales tax rate (half of the 6+5⁄8% rate charged statewide) at eligible merchants. Established in June 1996, the city's Urban Enterprise Zone status expires in June 2027.

The main commercial avenues of the city are Central Avenue and Main Street, both of which flow east to west, the latter of which was disturbed by the construction of Interstate 280. Recent efforts have been made to revitalize the commercial area, especially along Main Street and Evergreen Place. New apartments buildings & commercial space have been proposed and built over the last decade. Along South Harrison Street, new apartment buildings have gone up, while existing ones have been updated.

The East Orange School District serves students in pre-kindergarten through twelfth grade. The district is one of 31 former Abbott districts statewide, which are now referred to as "SDA Districts" based on the requirement for the state to cover all costs for school building and renovation projects in these districts under the supervision of the New Jersey Schools Development Authority.

East Orange Community Charter School is a public charter school that operates independently of the school district under a charter granted by the New Jersey Department of Education.

The East Orange Public Library at one time included three branch buildings of the original 36 Carnegie-funded libraries in New Jersey. It has a collection of 344,000 volumes and circulates about 319,000 items annually from four locations.

Ahlus Sunnah School is a K-12 madrasah that has been in East Orange since 2005.

People who were born in, residents of, or otherwise closely associated with East Orange include:

All content from Kiddle encyclopedia articles (including the article images and facts) can be freely used under Attribution-ShareAlike license, unless stated otherwise. Cite this article:
East Orange, New Jersey Facts for Kids. Kiddle Encyclopedia.