Short Hills is an unincorporated community and census-designated place (CDP) located within Millburn Township, in Essex County, New Jersey, United States. It is a popular commuter town for residents who work in New York City.

It is notable for being an affluent community. The median listing price of its homes was $1.75 million in February 2012, according to a report in The Wall Street Journal, citing data from Zillow. In 2014, Time magazine named it the "Richest Town in America" with seven in ten household incomes above $150,000 per year, the highest percentage in the United States. As of the 2010 United States Census, the CDP's population was 13,165.

Originally, the area that would become Short Hills was part of Springfield Township, Union County, New Jersey, and its eponymous hills are thought to have played a role in the movement of the Continental Army under George Washington during the Battle of Springfield.

Short Hills began as a planned community, when Stewart Hartshorn (who became wealthy from developing, perfecting and manufacturing the self-acting shade roller) purchased 13 acres (53,000 m2) of land in Millburn Township, near the present Hobart Avenue, Parsonage Hill Road, and Chatham Road. Hartshorn's purpose was to create "a harmonious community for people who appreciated nature," and "where natural beauty would not be destroyed by real estate developments, and where people of congenial tastes could dwell together." He later increased his land holdings to 56 acres (230,000 m2) for himself and 1,552 acres (6.28 km2) for the whole village, with each plot not owned by Hartshorn being no larger than 1/2 acre.

Hartshorn chose the name "Short Hills" because it reflected the topography of the region, and also because the local Lenape Native Americans used that same name to describe the region. One local resident suggested that he call his village "Hartshornville," but he refused, quietly content with Short Hills sharing his initials. 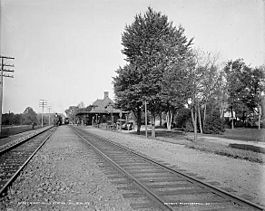 Hartshorn situated his "ideal town" near enough to a railroad to allow for an easy commute to Hoboken and, from there, to New York City. Hence, his decision in 1879 to build, at his own expense, a railroad station along the original Morris and Essex Railroad line. He also persuaded the United States Post Office to open a branch in his new railroad station in 1880, and in fact, the Post Office has always had a presence in Short Hills from that day and its own ZIP Code, 07078.

Hartshorn deliberately preserved strips of land along the railroad right-of-way from any development west of Old Short Hills Road. These strips separate Hobart Avenue to the north, and Chatham Road to the south, from the railway line. The only structure that has ever stood directly adjacent to the line is the railroad station. In 1944, the Hartshorn family also donated Crescent Park to Millburn Township, directly across from the station, with the stipulation that the park always remain open to the public.

After seventeen houses were erected, Hartshorn turned his attention to other "common elements." These included a Music Hall, which later became the Short Hills Racquets Club. However, Short Hills remains a relatively quiet place.

Stewart Hartshorn died in 1937 at the age of 97. His daughter Cora survived him, wrote her own history of the hamlet, and helped establish the Arboretum that bears her name.

In 1968 Temple B'nai Jeshurun relocated from Newark, NJ, to a 21-acre (8.5 ha) site in Short Hills. It is the oldest Reform Jewish congregation in New Jersey and, with 1,100 member families, one of the largest Jewish congregations in the state at the time of the move. Most of the property was purchased from Congressman Robert Kean, father of future New Jersey governor Thomas Kean. The land had been given to Kean's family by King George III of the United Kingdom.

In 1975 the Millburn-Short Hills Historical Society formed in conjunction with the American Bicentennial celebrations.

In 2001 the Christopher and Dana Reeve Paralysis Resource Center opened in Short Hills.

In 2002 local residents planted a memorial tree on the grounds of the railroad station, to honor those of their neighbors who died in the attacks on September 11, 2001.

In 2011 the historic Greenwood Gardens opened to the public. It is one of sixteen garden preservation projects in the United States overseen by the Garden Conservancy. 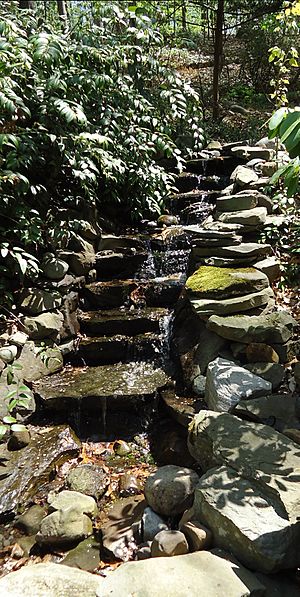 The opening of the Kearny Connection in 1996, establishing direct rail service to Penn Station in Midtown Manhattan, has enhanced real-estate values immensely.

Short Hills is home to many senior executives and controlling stockholders of some of the largest corporations in the United States and their families. The median family income was over $200,000. Dun & Bradstreet has its headquarters in Short Hills.

Though Short Hills has its own railroad station and post-office branch, it does not have an independent government. It remains today a part of the Township of Millburn, as it has been since its inception. Short Hills has a "downtown" business area that is smaller than downtown Millburn. Located along Chatham Road near the Short Hills railroad station, it includes the post office, a pharmacy, small eateries and specialty shops. The train station waiting room operates and a bar and grill during the evening hours and a newsstand and ticket agent are present from early morning hours until noon.

The climate in this area is characterized by hot, humid summers and generally mild to cool winters. According to the Köppen Climate Classification system, Short Hills has a humid subtropical climate, abbreviated "Cfa" on climate maps.

According to an analysis in Time magazine in 2014, Short Hills is the wealthiest community in the United States in terms of having the highest percentage of households (69%) with incomes above $150,000 per year. According to Forbes magazine, the median income in Short Hills is $229,222.

There were 4,146 households out of which 54.1% had children under the age of 18 living with them, 81.4% were married couples living together, 5.5% had a female householder with no husband present, and 11.2% were non-families. 9.9% of all households were made up of individuals, and 5.7% had someone living alone who was 65 years of age or older. The average household size was 3.18 and the average family size was 3.40.

All content from Kiddle encyclopedia articles (including the article images and facts) can be freely used under Attribution-ShareAlike license, unless stated otherwise. Cite this article:
Short Hills, New Jersey Facts for Kids. Kiddle Encyclopedia.