Althea Gibson (August 25, 1927 – September 28, 2003) was a World No. 1 American sportswoman who became the first African-American woman to be a competitor on the world tennis tour and the first to win a Grand Slam title in 1956. She is sometimes known as "the Jackie Robinson of tennis" for breaking the color barrier. Gibson was a member of Alpha Kappa Alpha sorority.

Althea Gibson was born at 9:00 am EDT on August 25, 1927 in Silver, Clarendon County, South Carolina to Daniel and Annie Bell Gibson. Althea had two siblings, a brother, Daniel Jr. (known as "Bubba") and a sister, Mildred.

Gibson played tennis while going to school for an education. In 1946, she moved to Wilmington, North Carolina, to work on her tennis game with Dr. Hubert A. Eaton and enrolled at Williston High School.

In 1958, Gibson retired from amateur tennis. Before the open era of tennis began, there was no prize money, other than an expense allowance, and no endorsement contracts. To begin earning prize money, tennis players had to give up their amateur status. As there was no professional tour for women, Gibson was limited to playing in a series of exhibition tours.

In retirement, Gibson wrote her autobiography and in 1959 recorded an album, Althea Gibson Sings, as well as appearing in the motion picture, The Horse Soldiers. In 1964, she became the first African American woman to play in the Ladies Professional Golf Association. However, she was too old to be successful and only played for a few years.

In 1971, Gibson was inducted into the International Tennis Hall of Fame, and in 1975, she was appointed the New Jersey state commissioner of athletics. After 10 years on the job, she went on to work in other public service positions, including serving on the governor's council on physical fitness. In later years, she suffered two cerebral aneurysms and, in 1992, a stroke. A few years later, Gibson called her former doubles partner Angela Buxton and told her she was living on welfare and unable to pay for rent or medication. Buxton arranged for a letter to appear in a tennis magazine. Buxton told Gibson nothing about the letter, but the latter received nearly US$1 million from around the world.

Gibson was married twice. Her first marriage to William Darben took place on October 17, 1965, but the couple was divorced in 1976, eleven years later. Darben died in 1995. She was also married to Sydney Llewellyn on April 11, 1983 and was divorced from him in 1988.

On the opening night of the 2007 US Open, the 50th anniversary of Gibson's victory at the US Championships in 1957 (now the US Open), Gibson was inducted into US Open Court of Champions. She was a 1994 inductee of the Sports Hall of Fame of New Jersey and 2009 inductee of the New Jersey Hall of Fame. In September 2009, the City of Wilmington, NC named its new community tennis complex the Althea Gibson Tennis Center.

Gibson became the first African American woman to join the Ladies Professional Golf Association tour, in 1964. Her best finish on the tour was a tie for second after a three-way playoff at the 1970 Len Immke Buick Open. Gibson retired from professional golf at the end of the 1978 season. 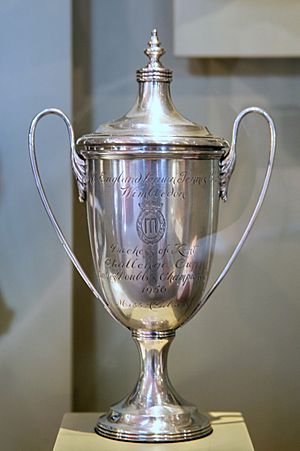 Althea Gibson's 1956 Wimbledon trophy, the first for an African American

A = did not participate in the tournament

All content from Kiddle encyclopedia articles (including the article images and facts) can be freely used under Attribution-ShareAlike license, unless stated otherwise. Cite this article:
Althea Gibson Facts for Kids. Kiddle Encyclopedia.