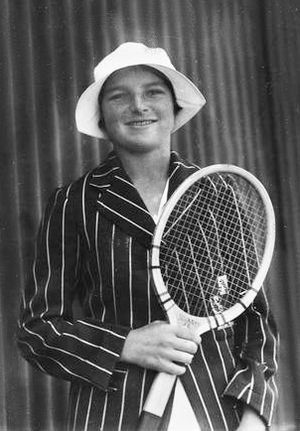 Thelma Dorothy Coyne Long (14 October 1918 – 13 April 2015) was an Australian tennis player. She was one of the female players who dominated Australian tennis from the mid-1930s to the 1950s. During her career, she won 19 Grand Slam tournament titles. In 2013, she was added into the International Tennis Hall of Fame.

Coyne Long was born in Sydney, New South Wales. For a short time in the early 1940s during World War II, she was married to Maurice Newton Long.

All content from Kiddle encyclopedia articles (including the article images and facts) can be freely used under Attribution-ShareAlike license, unless stated otherwise. Cite this article:
Thelma Coyne Long Facts for Kids. Kiddle Encyclopedia.