It is one of the largest historically black universities in the United States, in number of students. It awards bachelor's, master's and doctorate degrees.

FAMU's main campus is in Tallahassee. It is close to the State Capitol and the campus of Florida State University. The university also has campuses in Orlando, Miami, Jacksonville, Tampa and Crestview. 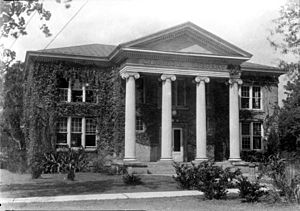 The Carnegie Library, in about 1930

The Florida A&M Tallahassee Campus has 132 buildings that spread out over 420 acres (1.7 km2). Part of the campus is listed on the U.S. National Register of Historic Places. This is named the Florida Agricultural and Mechanical College Historic District. It was placed on the list on May 9, 1996.