The Carnegie Library at FAMU is a historic building on the campus of Florida A&M University in Tallahassee, Florida. Built in 1908, the two-story, white-columned building was added to the National Register of Historic Places in 1996. "It was part of a national building program by philanthropist Andrew Carnegie. The Black Archives was created by the state Legislature in 1971 and opened its doors in 1975." It was one of many public and college libraries funded by Andrew Carnegie, which were named Carnegie Library after him. It is the oldest brick building on the campus and the first Carnegie Library to be built on a black land-grant college campus.

Carnegie's library was built at what is today FAMU because the city of Tallahassee refused it, since under Carnegie's rules it would have had to serve black patrons. (See History of Tallahassee, Florida#Black history.) At that moment, FAMU's predecessor, the State Normal and Industrial College for Colored Students, was in need of a new library. Its library had been located in the mansion of Florida Governor William Pope Duval, which burned in 1905. The Carnegie Library was built on the site of that mansion.

It was designed by architect William Augustus Edwards and was built in 1908. On November 17, 1978, it was added to the U.S. National Register of Historic Places.

In 1976, the Southeastern Regional Black Archives Research Center and Museum, formally known as the Florida Black Archives, was founded and occupied the library at Florida A&M. The archives expanded to the nearby Union Bank building in 1996 and a new building in 2006. The museum's exhibits focus on African American history in Florida, including the contributions of the African-American church, educational and social life at Florida A&M University, important figures in politics, science, medicine, and inventors, military experience and more. "The Archives was originally the Carnegie Library, and Dr. James Eaton had the vision of not only collecting memorabilia but presenting it to the students and the public in the early ‘70s. By the fall of 1976, he was able to pull all these different plans and some of the artifacts that he was collecting together to present it into this historic building that we walk through today."

In 2007, the archives was officially named in honor of veteran Florida legislator, retired U.S. Congresswoman and FAMU graduate Carrie P. Meek, who appropriated funds through Congress for the expansion of the facility, and Dr. James N. Eaton, D.H.L., Professor of History/Founder and first Director. 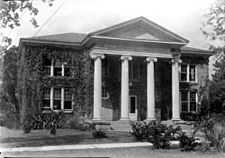 All content from Kiddle encyclopedia articles (including the article images and facts) can be freely used under Attribution-ShareAlike license, unless stated otherwise. Cite this article:
Carnegie Library at FAMU Facts for Kids. Kiddle Encyclopedia.