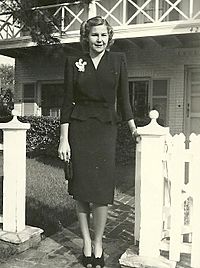 She was born in Oklahoma City, Oklahoma but moved to Beverly Hills, California when she was four years old.

She was inducted in the International Tennis Hall of Fame in 1967.

All content from Kiddle encyclopedia articles (including the article images and facts) can be freely used under Attribution-ShareAlike license, unless stated otherwise. Cite this article:
Louise Brough Facts for Kids. Kiddle Encyclopedia.