Kids Encyclopedia Facts
Not to be confused with Clarendon County, New South Wales.

Clarendon County is a county located below the fall line in the Coastal Plain region of U.S. state of South Carolina. As of the 2010 census, its population was 34,971. Its county seat is Manning.

This area was developed for lumber and mills, including textile mills. Clarendon County boasts one of the largest man-made lakes in the United States, Lake Marion, completed in 1941 as a New Deal project. It was planned as part of a national rural electrification initiative. Since the late 20th century, the dam's generation of hydroelectric power has also stimulated economic development and industry in the region.

Clarendon County was officially established in 1785, shortly after the American Revolutionary War, when the legislature divided Camden District into seven counties. One was Clarendon County. It was named after Edward Hyde, who was a Lord Proprietor and earl of Clarendon.

During the American Revolutionary War, the Battle of Half Way Swamp was fought in December of 1780. That was one of the many Revolutionary battles that took place in the area of Clarendon County. Others in this area were the following battles: Richbourg’s Mill, Nelson’s Ferry, Fort Watson/Santee Indian Mound, and Tearcoat. The Swamp Fox Murals Trail has been established as an historical landmark depicting the American Revolution and General Francis Marion, the "Swamp Fox". 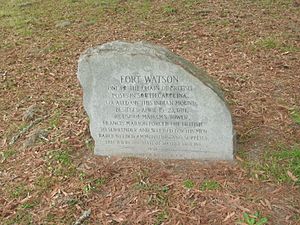 Memorial stone at the site of Fort Watson

The first European settlers in Clarendon County were ethnic French Huguenots, who traveled by boat up the Santee River. Their ancestors had earlier settled in Charleston after leaving France in the late 17th century to escape religious persecution. Transportation of goods by land was difficult, so canals were constructed to carry boat traffic around rapids in the river. The first notable canal was the Santee Canal, which was constructed in 1793. But due to the development of the railroads in the mid-1800s and construction linking major markets, the canal was superseded and ended operations some years later.

In 1798, the state legislature combined three counties - Clarendon, Claremont, and Salem - to form Sumter District for ease of administration. On December 19, 1855, a legislative act was passed establishing the Clarendon District, with the same boundaries as defined for the county in 1785. During the antebellum period, the county was developed as large plantations to cultivate commodity crops, particularly short-staple cotton, by the labor of enslaved African Americans. Cultivation of this crop was made profitable by development of the cotton gin by Eli Whitney, which made processing more labor-efficient. By the time of the Civil War, the population of the county was majority black.

In 1855, Captain Joseph C. Burgess was selected to determine the geographical center of the county, the preferred location for the county seat, so that a courthouse village could be built. The commissioners decided on the site where the present courthouse was erected. Manning was developed as the county seat. Captain Burgess deeded six acres to the state, providing sites for the courthouse and jail, in addition to streets 75-feet-wide on four sides.

In 1865, toward the end of the American Civil War, a body of General Sherman's Union troops under command of General Potter raided Clarendon county. They destroyed a large portion of Manning, including the court house. The raid took place a few days before Gen. Robert E. Lee´s surrender at Appomattox. The county recovered slowly from the Civil War due to its reliance on agriculture, which suffered a long depression.

The State Constitution of 1868 renamed the districts as counties. Agriculture continued as the mainstay of the economy through much of the 19th century, and planters had to adjust to a free labor economy. They gradually relied on a system of mostly African-American tenant farmers and sharecroppers. Lumber and related mills and industries became increasingly important, with towns developed along railroad lines in the aarea.

Following Reconstruction, white Democrats regained control of the state legislature, passing laws for segregation of public facilities, Jim Crow and a new constitution of 1895 that effectively disfranchised most blacks in the state. This exclusion from the political system was not ended until after decades of activism by African Americans, who gained passage of federal civil rights legislation in the mid-1960s to enforce their constitutional rights.

In November 1941, Lake Marion was created as a reservoir by construction of the Santee Dam by the United States Corps of Engineers. The dam was built across the Santee River to generate hydroelectric power for rural electrification, one of the major infrastructure projects initiated under President Franklin D. Roosevelt's New Deal federal investments during the Great Depression. Lake Marion and the Santee Dam were part of the Santee-Cooper Hydroelectric and Navigation Project.

Two notable court cases in Clarendon County in the mid-20th century were part of challenges by the Civil Rights Movement to racial segregation of public facilities; these cases related to segregated public schools. This was concluded in law by the United States Supreme Court ruling in Brown v. Board of Education (1954), which declared that separate but equal schools were unconstitutional. The court learned that the separate school were historically underfunded in most Southern states and seldom equal. These cases were Levi Pearson v. Clarendon County Board of Education (1947), and Briggs v. Elliott (1952).

Clarendon Country is located in the east central portion of South Carolina in the Piedmont area (See Map 1). The county covers 606.94 square miles; Lake Marion, located in the southern portion of the county, covers an additional 95 square miles of the county (See Map 2). Most of the land is predominantly sand and loamy soils. Clarendon County has a moderate climate with very warm summers and mild winters. The average precipitation is 55 inches per year. The growing season is 225 days, so farmers have a long season to grow crops. Some of the major crops grown in Clarendon County are cotton, tobacco, corn and soybean.

According to Core Based Statistical Classifications, Clarendon County is classified as a non-core area, and is neither a metropolitan or micropolitan statistical area. As seen in Table 1, there are only 57.60 people per square mile in Clarendon County, significantly less than average in South Carolina, areas of which have been urbanized.

Clarendon County is characterized by a Humid subtropical climate with hot, humid summers and cool, dry winters. The county also holds the state's records for both maximum 24-hour snowfall and largest hailstone.

The population has only slightly increased since 1920; only 20 percent compared to 71 percent for South Carolina. From 1920 to 1930 and from 1950 to 1970, there were significant declines in population, 16 percent and 26 percent, respectively. In part these declines reflected the Great Migration of African Americans out of the South, to seek better jobs, education and living opportunities.

As seen in the Table, the growing majority of the population of Clarendon County is Black or African American (50.4%). This reflects historic settlement patterns when the area had been developed for commodity agriculture and large plantations. In the 21st century, 27.9 percent of the State of South Carolina is Black or African; White or Caucasians comprise 45 percent of the population in Clarendon County and 60 percent in South Carolina, respectively.

In regard to education, 13.4% of the population had Bachelor’s degree, which is approximately 10% less than the state of South Carolina. There is a higher percentage of elderly, aged 65 and older, in Clarendon County in comparison to South Carolina, 17.6% and 14.1%, respectively. The population of Clarendon County is stationary in the area; more than 90% of the population has been living in the same house for at least a year. The median household income is $33,355, approximately $10,000 less than the median for the State of South Carolina.

Clarendon County has abundant ground-water resources of good quality. The Department of Natural Resources report on the ground-water resources in Clarendon suggests that the county is in a fortunate position for obtaining adequate water for domestic and public supplies, industry, and irrigation. Water is obtained chiefly from sand aquifers in the Black Creek and Middendorf Formations.

Quantities obtainable from wells are adequate for public supplies, industrial uses, and irrigation. Well yields as great as 1,500 gallons per minute are obtained, and many wells can produce more than 100 gallons per minute. The water is of good quality, being soft and low in mineral content. There are five public water-supply systems in Clarendon County. In 2008 the systems had the following pumpage rates, in millions of gallons per day:

From boating, fishing, hiking and hunting, to golf on some of the world’s finest courses, Clarendon offers outdoor enthusiasts a buffet of things to do. The county is known for its championship-level catches of striped bass. Lake Marion is the site of several professional bass fishing tournaments, including the internationally known Citgo/Bassmasters Tournament and the Wal-Mart/FLW tour. Reader’s Digest magazine rated Lake Marion as one of “America’s 100 Best” for fishing and specifically pointed to the lake’s catfish.

Hunting is also a popular activity in Clarendon County, with deer, turkey and other small game available. or other small game animals. Several sporting clay operations and gun ranges are located throughout the county, as well as hunting preserves devoted to providing hunters a controlled environment.

Clarendon County has a wide range of hiking trails.

The Cultural Arts Center in Summerton and Weldon Auditorium in Manning present a diverse mix of cultural activities. These include plays, concerts by nationally renowned artists, and ballet performances, alongside a medley of local artists.

All content from Kiddle encyclopedia articles (including the article images and facts) can be freely used under Attribution-ShareAlike license, unless stated otherwise. Cite this article:
Clarendon County, South Carolina Facts for Kids. Kiddle Encyclopedia.