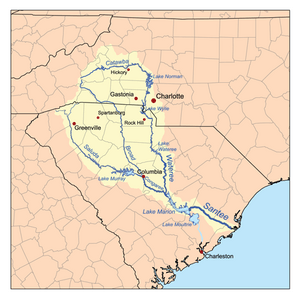 Map of the Santee River watershed.

The Santee River is a river of South Carolina in the United States, 143 mi (230 km long). The Santee and its tributaries give the main drainage and navigation for the central coastal plain of South Carolina, emptying into the Atlantic Ocean about 440 mi (710 km) from its farthest headwater on the Catawba River in North Carolina. Much of the upper river is in the expansive horn-shaped Lake Marion reservoir. The reservoir is made by the 8 mi (13 km) long Santee Dam. The dam was built during the 1930s as a WPA project to give a major source of hydroelectric power for the state.

All content from Kiddle encyclopedia articles (including the article images and facts) can be freely used under Attribution-ShareAlike license, unless stated otherwise. Cite this article:
Santee River Facts for Kids. Kiddle Encyclopedia.