Manning is a city in and the county seat of Clarendon County, South Carolina, United States. The population was 4,108 as of the 2010 census, with an estimated population in 2018 of 3,941. It was named after former South Carolina governor John Laurence Manning.

In 1855, the South Carolina Legislature appointed a group of commissioners to select and purchase a tract of land for "the Village of Manning" in the newly formed Clarendon County. According to the Watchmen, a local newspaper of the time, "the Legislature (had) granted a bill of divorce between Clarendon and Claremont (Sumter)."

Thirteen men were named as commissioners to select and acquire from 6 to 60 acres (2.4 to 24.3 ha) on which to lay out the new courthouse village: R. C. Baker, L. F. Rhame, J. C. Brock, W. W. Owens, Joseph Sprott, J. C. Burgess, M. T. Brogdon, J. J. Nelson, Samuel A. Burgess, J. J. McFadden, Jesse Hill, R. R. Haynsworth, and P. S. Worsham. Five other commissioners, R. I. Manning, L. F. Rhame, J. B. Brogdon, J. J. Conyers, and William A. Burgess, were later named when it came time to erect the courthouse and jail from a state appropriation of $18,000, plus whatever funds might be realized from the sale of lots. The site for the village was presented to the state by Captain Joseph Copley Burgess, and the Plat of Manning was prepared and filed in Sumter County Courthouse. (Captain Burgess had also donated land for the courthouse and jail in Manning.) On the second Monday of the following October, the new district officers were elected, and Clarendon began to operate independently from Sumter District with Manning as its county seat.

The city was named for John Lawrence Manning, who was elected to both chambers in the General Assembly. He was later chosen by the Assembly to serve as Governor of South Carolina from 1852 to 1854. George Allen Huggins was the first intendant (mayor) of Manning.

Manning's Post Office was established in 1856, and Thomas S. Coogler was appointed as the first Postmaster. Manning's first library, the Hannah Levi Memorial Library, was completed in 1910. It was funded by the children of Moses and Hannah Levi, and by the sale of the Moses Levi Institute. They named it in honor of their mother. It eventually became known as the Manning Library and was the only public library in the county. It became a county library in 1976 and continued to operate until the opening of the Harvin Clarendon County Library in 1984. The building now houses the Clarendon County Archives and History Center.

Manning was severely damaged several times over its history. A large portion of the original town, including the courthouse, was destroyed in the Civil War in 1865 during what is known as "Potter's Raid". This raid by Union troops took place only a few days before Gen. Robert E. Lee's surrender at Appomattox. Manning was later struck by a downtown fire in 1895 and damaged by a tornado in 1915. 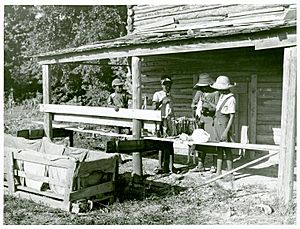 Railroads, abundant timber and diverse agriculture allowed Manning to flourish during the late 19th century and into the 20th century. In 1933, Highway 4 was changed to U.S. Route 301 and thanks in part to the efforts of Manning resident W. P. Legg, Manning and Clarendon County became a preferred route of the Washington to Florida motorist. Manning is along the I-95 corridor and attracts retirees looking for various recreational activities and mild climates.

As early as 1960 Manning was one of many towns across the South for the staging of peaceful Civil Rights demonstrations and sit-ins. Unlike in some other areas, the demonstrations in Manning occurred without significant incident, but helped belie the local media's message that black Carolinians accepted the status quo. Manning and the surrounding region was still adjusting to the decisions handed down in the Briggs v. Elliott and Brown v. Board of Education rulings against racial segregation in schools.

According to the United States Census Bureau, Manning has a total area of 2.76 square miles (7.15 km2), all of it land. It is just south of the Pocotaligo River, a tributary of the Black River.

Manning maintained school systems, one for black students and one for whites until court-ordered integration caused Manning Training School (for blacks) to merge with all white Manning High School in 1970. At that time, Manning Training School became Manning Middle School, then later Manning Elementary. In response, an all-white private school, Laurence Manning Academy was created. Manning is also the location of the F.E. DuBose Campus of Central Carolina Technical College.

Manning has a lending library, the Clarendon County Public Library.

All content from Kiddle encyclopedia articles (including the article images and facts) can be freely used under Attribution-ShareAlike license, unless stated otherwise. Cite this article:
Manning, South Carolina Facts for Kids. Kiddle Encyclopedia.