It is the home of Shaw AFB, headquarters to the 9th Air Force, AFCENT, United States Army Central, with a number of other tenant units. It is one of largest bases in the USAF's Air Combat Command.

According to the U.S. Census Bureau, the county has a total area of 682 square miles (1,770 km2), of which 665 square miles (1,720 km2) is land and 17 square miles (44 km2) (2.5%) is water. It is drained by the Black River and its tributaries. Its western border is formed by the Wateree River. One of South Carolina's most famous areas are the High Hills of Santee comprising the western part of the county.The county is one of five that borders Lake Marion, also known as South Carolina's "Inland Sea." 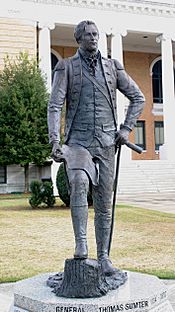 Statue of Thomas Sumter on the courthouse lawn in Sumter

All content from Kiddle encyclopedia articles (including the article images and facts) can be freely used under Attribution-ShareAlike license, unless stated otherwise. Cite this article:
Sumter County, South Carolina Facts for Kids. Kiddle Encyclopedia.