Stateburg is a census-designated place (CDP) in the High Hills of Santee in Sumter County, South Carolina, United States. The population was 1,380 at the 2010 census. It is included in the Sumter, South Carolina Metropolitan Statistical Area. Stateburg is located within the larger Stateburg Historic District.

In the 1780s, after the South Carolina General Assembly decided to move the state capital from Charleston to the central part of the state, Stateburg lost by only a few votes to a place called Granby's Ferry on the Congaree River near the confluence of the Broad and Saluda rivers. Granby's Ferry soon was renamed Columbia, which is still the capital.

Borough House Plantation and Church of the Holy Cross are listed on the National Register of Historic Places. 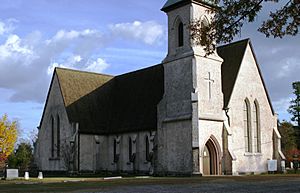 Historic Church of the Holy Cross, High Hills of the Santee, Stateburg. It is built of rammed earth.

There were 461 households, out of which 38.6% had children under the age of 18 living with them, 73.5% were married couples living together, 6.5% had a female householder with no husband present, and 15.6% were non-families. 13.2% of all households were made up of individuals, and 2.2% had someone living alone who was 65 years of age or older. The average household size was 2.74 and the average family size was 2.99.

All content from Kiddle encyclopedia articles (including the article images and facts) can be freely used under Attribution-ShareAlike license, unless stated otherwise. Cite this article:
Stateburg, South Carolina Facts for Kids. Kiddle Encyclopedia.