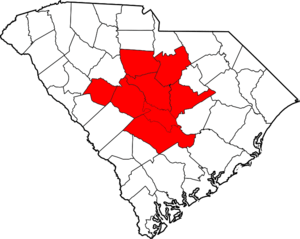 The eight counties that usually compose the Midlands.

The Midlands region of South Carolina is the middle area of the state. The region's main center is Columbia, the state's capital. The Midlands is so named because it is halfway point between the Upstate and the Lowcountry. The main area code is 803.

The area has become a major business center in the state, for its growing production of paper products, textile, medical supplies and steel. It is also a center for farming and medical care. The area is also involved in attractions and tourism, featuring shopping, fishing and amusement.

The Midlands area of South Carolina includes at least these eight counties: 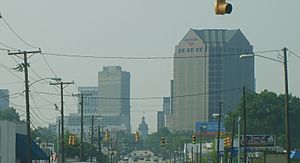 Suburban towns and cities over 10,000 in population

Suburbs with less than 10,000 inhabitants

All content from Kiddle encyclopedia articles (including the article images and facts) can be freely used under Attribution-ShareAlike license, unless stated otherwise. Cite this article:
Midlands of South Carolina Facts for Kids. Kiddle Encyclopedia.