Lexington is the county seat and the largest town of Lexington County, South Carolina, United States. Lexington is a suburb of the state's capital and largest city, Columbia. The population was 19,898 at the 2013 census. The U.S. Census Bureau estimated 2016 population is 24,905.

In 1735, the colonial government of King George II established eleven townships in backcountry South Carolina, to encourage settlement, and to provide a buffer between Native American tribes to the West and colonial plantations in the Lowcountry. The townships included one named Saxe Gotha, which flourished with major crops of corn, wheat, tobacco, hemp, and flax, as well as beeswax and livestock.

The Battle of Tarrar Springs was fought nearby on November 16, 1781. In 1785, Saxe Gotha was replaced with Lexington County, in commemoration of the Battles of Lexington and Concord in Massachusetts. The county's first courthouse was built in Granby, but chronic flooding forced the courthouse to move in 1820 to its present location, establishing the community of Lexington Courthouse. The community was incorporated as the Town of Lexington in 1861.

In 1865 Union Army forces destroyed the courthouse and many buildings in the town. But local farms and the lumber industry helped stabilize the economy after Reconstruction. The town grew due to the Columbia to Augusta Railroad and the Lexington Textile Mill, constructed in 1890.

Many current brick buildings were built in the aftermath of severe fires in 1894 and 1916.

The Move Over Law, a law that requires drivers to change lanes when there is a stopped emergency vehicle on the side of the road, originated in Lexington, SC, after a South Carolina Paramedic, James D. Garcia, was struck and injured at an accident scene on Jan. 28, 1994. Garcia was listed at fault, leading to his work to create this law. SC's version (SC 56-5-1538) passed in 1996, and was revised in 2002.

A Murphy Express gas station on Augusta Highway in Lexington, SC sold a $400 million winning Powerball ticket on September 18, 2013. This ticket was the fifth largest winning ticket of any United States lottery.

On November 5, 2013, incumbent Lexington mayor Randy Halfacre lost a reelection bid to Councilman Steve MacDougall by only 18 votes. A recount was initiated but the results remained the same.

Buildings listed on the National Register of Historic Places. include: 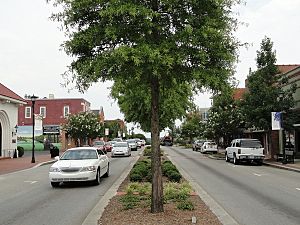 A view of Lexington's Main Street.

The CMRTA no longer runs any stops within town limits. There are no public transportation options, but taxi services are available. 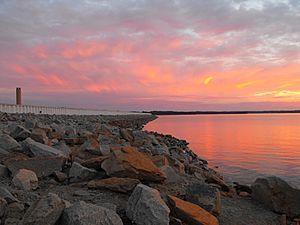 Slightly north of the relatively affluent town of Lexington rests one of South Carolina's major lakes, Lake Murray. The lake is held by a 1.7 mile long dam which people are free to drive, bike, run, or walk across. The Saluda Dam, or Lake Murray Dam, provides electricity for the surrounding area and is a beacon for the Midlands of South Carolina. There is also a public swimming area that is open during the summer months on the Lexington side of the dam.

There were 3,644 households out of which 40.5% had children under the age of 18 living with them, 55.9% were married couples living together, 12.3% had a female householder with no husband present, and 29.8% were non-families. 24.9% of all households were made up of individuals and 7.5% had someone living alone who was 65 years of age or older. The average household size was 2.51 and the average family size was 3.03.

This is a list of municipalities within 15 miles of the town center of Lexington, SC:

All content from Kiddle encyclopedia articles (including the article images and facts) can be freely used under Attribution-ShareAlike license, unless stated otherwise. Cite this article:
Lexington, South Carolina Facts for Kids. Kiddle Encyclopedia.