Cayce is a city in Lexington and Richland counties in the U.S. state of South Carolina, along the Congaree River. The population was 12,528 at the 2010 census. It is part of the Columbia, South Carolina, Metropolitan Statistical Area.

Cayce lies mostly across the Congaree River from the state capital of Columbia, with a newly annexed section on the Richland County side awaiting development. Because both it and the neighboring city of West Columbia share road names and schools, they are sometimes referred to jointly as "Cayce-West Columbia". However, they are politically separate cities.

The Congaree River has always played a dominant role in Cayce's development. Cayce and other local governments jointly developed the Riverwalk along the Congaree, which provides walking, jogging, and nature observation opportunities. Development on both sides of the river is an important factor driving the city's economy. 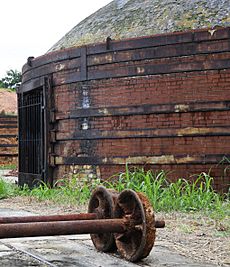 One of the kilns from the Guignard Brick Works, established in 1803

What was to become Cayce was home to Native Americans have for at least 12,000 years; This includes what is now known as the Manning Archeological Site, the SAM Site, and the Taylor Site.

Hernando de Soto reached the area in 1540, encountering a large Indian village at Congaree Creek, where Cayce now stands. Near the end of the 17th century, explorers such as John Lawson visited and documented his trip. In 1718, the English built the first permanent fort, becoming the first structure built in the Midlands. A second fort was built on the river in 1748. These forts were referred to as Congaree Fort #1 and Congaree Fort #2, and became part of the Congarees Site in 1974.

The Guignard Brick Works were established on the west bank of the Congaree in 1803 and remained active for nearly two centuries.

The town was incorporated in 1914 and named for local businessman William J. Cayce. 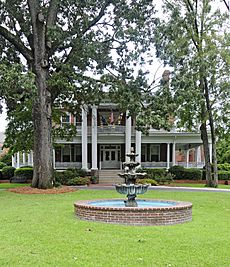 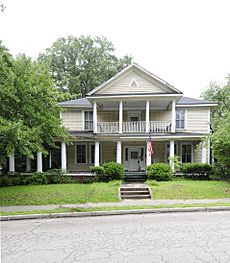 South Carolina Highway 2 is within city limits; Cayce is traversed by I-26 and I-77,

Columbia Metropolitan Airport (IATA:CAE) is adjacent to the city limits.

All content from Kiddle encyclopedia articles (including the article images and facts) can be freely used under Attribution-ShareAlike license, unless stated otherwise. Cite this article:
Cayce, South Carolina Facts for Kids. Kiddle Encyclopedia.