Newberry is a city in Newberry County, South Carolina, in the Piedmont 43 miles (69 km) northwest of Columbia. The charter was adopted in 1894. The population was 10,277 at the 2010 census. It is the county seat of Newberry County; at one time it was called Newberry Courthouse.

Newberry became a city in 1976, but did not report the change to the Census Bureau for more than twenty-five years. As a result, the city was listed as a town in the 2000 census.

It is the home of Newberry College, a private liberal-arts college affiliated with the Evangelical Lutheran Church in America.

According to the United States Census Bureau, the town had a total area of 6.6 square miles (17.0 km²), all of it land. 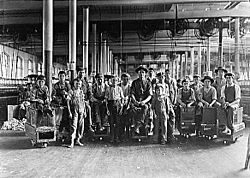 A few of the doffers and sweepers in the Mollahan Mills. December 1908. Photographed by Lewis Hine.

There were 3,970 households out of which 29.7% had children under the age of 18 living with them, 36.5% were married couples living together, 22.3% had a female householder with no husband present, and 36.3% were non-families. 31.7% of all households were made up of individuals and 15.9% had someone living alone who was 65 years of age or older. The average household size was 2.42 and the average family size was 2.97.

European settlers (primarily German, Scots-Irish, and English) began arriving in great numbers in the 1750s. Newberry County was formed from the Ninety-Six District in 1785. Because of its central location, the town of Newberry was chosen in 1789 as the county seat for Newberry County, which was part of an extensive area of cotton plantations. County and town politics were dominated by planters. By the coming of the railroad in 1851, Newberry had become a thriving trade center. This remained the case until the 1860s.

During the American Civil War, Newberry College was used as a hospital for Confederate and later Union troops. The historic Newberry Court House wasn't burned by William Tecumseh Sherman's troops as he swept through the South.

All content from Kiddle encyclopedia articles (including the article images and facts) can be freely used under Attribution-ShareAlike license, unless stated otherwise. Cite this article:
Newberry, South Carolina Facts for Kids. Kiddle Encyclopedia.