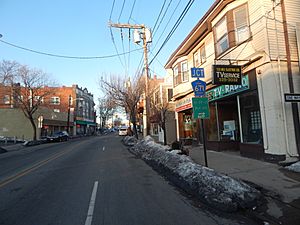 West Orange is a suburban township in Essex County, New Jersey, United States. As of the 2010 United States Census, its population was 46,207, an increase of 1,264 (+2.8%) from the 44,943 counted in the 2000 Census. West Orange is both an inner-ring suburb of Newark (the seat of Essex County, and New Jersey's largest city) and a commuter suburb of New York City; it is approximately 12 miles west of Manhattan. West Orange is well known for having been home to the inventor Thomas Edison, who also maintained a laboratory and workshop in town.

West Orange was initially a part of Newark township, and remained so until November 27, 1806, when the territory now encompassing all of The Oranges was detached to form Orange Township. On April 13, 1807, the first government was elected. On January 31, 1860, Orange was incorporated as a town, and on April 3, 1872, it was reincorporated as a city. Almost immediately, Orange began fragmenting into smaller communities, primarily because of local disputes about the costs of establishing paid police, fire and street departments. South Orange was organized on April 1, 1861, Fairmount (an independent municipality for less than one year that was later to become part of West Orange) on March 11, 1862, and East Orange on March 4, 1863. West Orange (including what had been the briefly independent municipality of Fairmount) was incorporated as a township on April 10, 1863, and was reformed as a town on February 28, 1900. In 1980, West Orange again became a township to take advantage of federal revenue sharing policies that allocated a greater share of government aid to municipalities classified as townships.

The township derives its name from the city of Orange, which in turn is derived from William III of England or William IV, Prince of Orange. 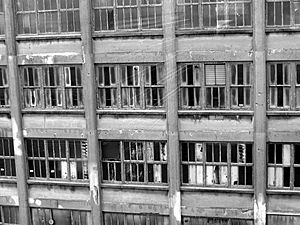 Llewellyn Park, the first planned community in America, is located within West Orange, and was designed by entrepreneur Llewellyn Haskell and architect Alexander Jackson Davis in 1857. Llewellyn Park is considered among the best examples of the "Romantic Landscape" movement of that period. Thomas Edison was one of the many residents. 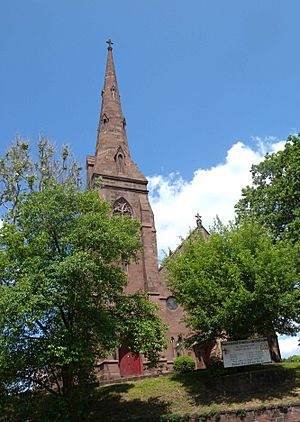 The West Branch of the Rahway River originates at Crystal Lake and passes through the township in South Mountain Reservation.

Downtown West Orange and The Valley

The oldest and most densely populated part of the township is Downtown West Orange, which lies in the low basin along the township's eastern border with the city of Orange and Montclair. Main Street, in this section, is home to the Thomas Edison National Historical Park, as well as the municipal building, police headquarters, and a branch post office. The West Orange Public Library is located on Mount Pleasant Avenue in this section, just west of Main Street. Downtown West Orange is laid out in the pattern of a traditional town, and is formed around the western termini of two major east-west arteries of the Newark street grid: Central Avenue and Park Avenue. Downtown West Orange has the most urban character of the township's neighborhoods, while the Valley is home to a growing arts district and a significant African American community.

West of Downtown, the neighborhoods of West Orange become increasingly suburban as one ascends the steep hill of the First Watchung Mountain along Northfield, Mount Pleasant, or Eagle Rock Avenue. The housing stock in the neighborhoods of Hutton Park and Gregory is a mixture of Victorian, Jazz Age, and Tudor-style houses; large estates; garden apartments; and post-World War II modern houses. The Victorian enclave of Llewellyn Park, one of America's first planned residential communities, is also located on the First Mountain, having been created in 1853 as a site for country homes for the wealthy from New York City. Many blocks on the First Mountain have sweeping views of the Newark and New York City skylines.

Beyond the high ridge traced by Prospect Avenue, West Orange becomes a patchwork of post-World War II suburban neighborhoods, interspersed with pockets of older Victorian homes, as well as golf courses, professional campuses, and shopping centers. Pleasantdale, a walkable business district in this part of the township, includes a number of restaurants, office buildings, and houses of worship. Pleasantdale is also home to a significant Orthodox Jewish community.

Finally, the westernmost section of West Orange lies along the eastern face of the Second Watchung Mountain, and includes large portions of the South Mountain Reservation. The housing stock in this neighborhood resembles that of Pleasantdale, as well as those of the adjacent suburban townships of Millburn and Livingston.

Fishing and kayaking is available on the Rahway River.

The township offers a jitney service that operates on weekdays, offering service to the Orange and South Orange train stations.

Developed by Sol Atlas, Essex Green Shopping Center is an outdoor mall with stores, like ShopRite, restaurants and an AMC Theatres Fork and Screen dine-in movie theater. The 350,000-square-foot (33,000 m2) mall, the largest of its type in Essex County, was purchased in 2016 by Clarion Partners.

Seton Hall Preparatory School is a Roman Catholic all boys' high school that operates under the supervision of the Archdiocese of Newark. Founded in 1856 on the campus of Seton Hall University, the school moved to West Orange in 1985.

The Jersey Rockhoppers hockey team of the Eastern Professional Hockey League, formed for the 2008–09 season, played home games at the Richard J. Codey Arena. The arena also used to be the practice facility for the New Jersey Devils from 1986 to 2007. The New Jersey Daredevils, a special needs hockey team formed in 2002 that plays in the SHI (Special Hockey International League), uses the arena for home games and practices. Annually in October, the Daredevils host a Halloween themed tournament for Special Hockey International teams (including the Daredevils themselves) called Frankenfest. Frankenfest has been going on every October since 2009. The New Jersey Devils Youth Hockey team also plays here as well.

People who were born in, residents of, or otherwise closely associated with West Orange include:

All content from Kiddle encyclopedia articles (including the article images and facts) can be freely used under Attribution-ShareAlike license, unless stated otherwise. Cite this article:
West Orange, New Jersey Facts for Kids. Kiddle Encyclopedia.