William IV (Willem Karel Hendrik Friso; 1 September 1711 – 22 October 1751) was Prince of Orange from birth and the first hereditary Stadtholder of all the United Provinces of the Netherlands from 1747 till his death in 1751. During his whole life he was furthermore ruler of the Principality of Orange-Nassau within the Holy Roman Empire.

William was born in Leeuwarden, Netherlands, the son of John William Friso, Prince of Orange, head of the Frisian branch of the House of Orange-Nassau, and of his wife Landgravine Marie Louise of Hesse-Kassel (or Hesse-Cassel). He was born six weeks after the death of his father.

William succeeded his father as Stadtholder of Friesland and also, under the regency of his mother until 1731, as Stadtholder of Groningen. In 1722 he was elected Stadtholder of Guelders. The four other provinces of the Dutch Republic:, Holland, Zeeland, Utrecht and Overijssel had in 1702 decided not to appoint a stadtholder after the death of stadtholder William III, issuing the history of the Republic into a period that is known as the Second Stadtholderless Period. In 1747 those four provinces also accepted William as their stadtholder.

In 1720 William was named the 549th Knight of the Order of the Garter. On 25 March 1734 he married at St James's Palace Anne, Princess Royal, eldest daughter of King George II of Great Britain and Caroline of Ansbach. William and Anne had five children: 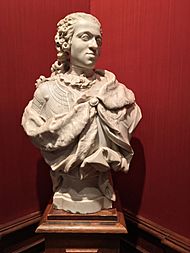 In 1740, the War of the Austrian Succession broke out. The conflict pitted Austria against France over the issue of whether Maria Theresa had the right to inherit her father Emperor Charles VI's crown. The Dutch Republic sided with Austria in 1747 in order to maintain a buffer zone between itself and France, whereupon French troops invaded the Austrian Netherlands. In a few weeks, Louis XV's troops conquered most of the towns in the Austrian Netherlands where the Dutch had stationed troops under the Barrier Treaty, as well as the most important towns in Zeelandic Flanders. The Dutch Republic was at the time weakened by internal division. The Dutch decided that their country needed a single strong executive, and turned to the House of Orange. William and his family moved from Leeuwarden to The Hague. On 4 May 1747, the States General of the Netherlands named William General Stadtholder of all seven of the United Provinces of the Netherlands, and made the position hereditary for the first time. William first met Duke Louis Ernest of Brunswick-Lüneburg in 1747, and two years later appointed him field marshal of the Dutch States Army, which later led to Louis Ernest serving as one of the regents for William's heir.

William IV was considered an attractive, educated, and accomplished prince in his prime. Although he had little experience in state affairs, William was at first popular with the people. He stopped the practice of indirect taxation by which independent contractors managed to make large sums for themselves. Nevertheless, he was also a Director-General of the Dutch East India Company, and his alliance with the business class deepened while the disparity between rich and poor grew. 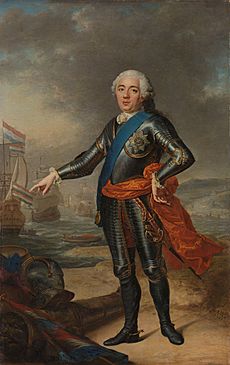 Portrait of William by Jacques Aved, 1751

William served as General Stadtholder of all the Netherlands until he died of a stroke in 1751 at The Hague.

The county of Orange, Virginia, and the city of Orangeburg, South Carolina, are named after him.

All content from Kiddle encyclopedia articles (including the article images and facts) can be freely used under Attribution-ShareAlike license, unless stated otherwise. Cite this article:
William IV, Prince of Orange Facts for Kids. Kiddle Encyclopedia.