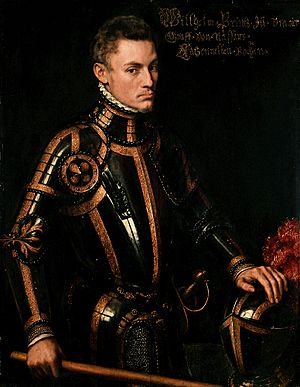 William I of Orange was a stadtholder during the Dutch Revolt against the Spanish Empire.

A stadtholder is a political leader or governor who controls a region or area of land for someone else.

The title was used in the northern part of Western Europe during the 18th century. It was most commonly used in the areas that now are the countries of Belgium and the Netherlands. When a person ruled many different areas, they often could not take control of all of them at the same time. To deal with this problem, they would make a person a Stadthold of an area. That person would act as the ruler for that area. The stadtholder had total control of the area.

All content from Kiddle encyclopedia articles (including the article images and facts) can be freely used under Attribution-ShareAlike license, unless stated otherwise. Cite this article:
Stadtholder Facts for Kids. Kiddle Encyclopedia.