Essex Fells was incorporated as a borough by an act of the New Jersey Legislature on March 31, 1902, from portions of Caldwell Township (now Fairfield Township). The community's name was derived by taking "Essex" from the name of the county and adding "Fells" from the name of John F. Fell which also means hill or down.

Essex Fells was part of the Horseneck Tract, which was an area that consisted of what are now the municipalities of Caldwell, West Caldwell, North Caldwell, Fairfield, Verona, Cedar Grove, Essex Fells, Roseland, and portions of Livingston and West Orange.

In 1702, settlers purchased the 14,000 acres (57 km2) Horseneck Tract — so-called because of its irregular shape that suggested a horse's neck and head — from the Lenni Lenape Native Americans for goods equal to $325. This purchase encompassed much of western Essex County, from the Orange, or First Mountain in the Watchung Mountain range to the Passaic River.

In the late 1800s, Philadelphia developer Anthony S. Drexel realized the impact of train travel on residential development and sent Charles W. Leavitt to the northern New Jersey area near the end of the Caldwell line. Leavitt, Drexel and Drexel's son-in-law John F. Fell formed the Suburban Land Company and purchased 1,000 acres of land from the estate of Revolutionary War General William J. Gould. In order to create their residential development the group commissioned noted architect Ernest W. Bowditch. The community's name was derived by taking "Essex" from the name of the county and adding "Fells" from the name of John F. Fell which also means hill or down.

Based on an ordinance passed in 1928, commercial activity in the borough is limited to a single three-story building constructed to look like a house and two small workshops on a dead end. As of 2000[update], Essex Fells had 750 houses, most of which were custom built, with many occupying lots several acres in size. The borough has no apartment buildings, condos, office buildings or traffic lights. The only units available for rental are in carriage houses and other ancillary structures.

There were 728 households out of which 42.6% had children under the age of 18 living with them, 73.4% were married couples living together, 6.2% had a female householder with no husband present, and 17.9% were non-families. 16.3% of all households were made up of individuals, and 9.9% had someone living alone who was 65 years of age or older. The average household size was 2.90 and the average family size was 3.26.

Grover Cleveland Park, the seventh-largest park in the Essex County park system, is a heavily wooded park covering 41.48 acres (167,900 m2) in the western section of the county along the Caldwell-Essex Fells border.

Essex Fells Pond, or also known as "The Pond" by Essex Fells residents, is a popular destination in the winter. Located on Fells Road, "The Pond" attracts people of all ages, typically during the months of December through March. Popular activities include ice skating, pond hockey, and figure skating.

NJ Transit provides service in the borough to and from Newark on the 29 and 71 routes.

The Essex Fells School District serves public school students in pre-kindergarten through sixth grade at Essex Fells School. As of the 2018–19 school year, the district, comprised of one school, had an enrollment of 252 students and 32.4 classroom teachers (on an FTE basis), for a student–teacher ratio of 7.8:1. In 2016, the school was one of ten schools in New Jersey recognized as a National Blue Ribbon School by the United States Department of Education, a recognition celebrating excellence in academics.

Students in public school for seventh through twelfth grades attend the West Essex Regional School District, a regional school district serving students from Essex Fells, Fairfield, North Caldwell and Roseland. Schools in the district (with 2018–19 enrollment data from the National Center for Education Statistics) are West Essex Middle School with 564 students in grades 7-8 and West Essex High School with 1,123 students in grades 9-12. Seats on the nine-member board of education of the high school district are allocated based on population, with one seat assigned to Essex Fells. 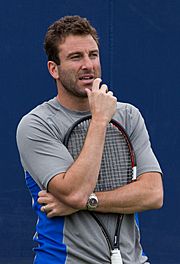 People who were born in, residents of, or otherwise closely associated with Essex Fells include:

All content from Kiddle encyclopedia articles (including the article images and facts) can be freely used under Attribution-ShareAlike license, unless stated otherwise. Cite this article:
Essex Fells, New Jersey Facts for Kids. Kiddle Encyclopedia.