Verona and several neighboring towns were all originally one town known as the Horseneck Tract. In 1702, a group of settlers left Newark and purchased a large tract of land northwest of their home city for the equivalent of a few hundred dollars from the Lenni Lenape Native Americans. This piece of land extended west and north to the Passaic River, south to the town center of what would become Livingston, and east to the First Watchung Mountain, and was called Horseneck by the natives because it resembled the neck and head of a horse. What was then known as Horseneck contained most of the present day northern Essex County towns: Verona, along with Caldwell, West Caldwell, Cedar Grove, Essex Fells, Fairfield, North Caldwell, and Roseland are all located entirely in Horseneck, and parts of what are today Livingston, Montclair, and West Orange also were contained in the Horseneck Tract.

After the Revolutionary War, the area of Horseneck was incorporated as "Caldwell Township" in honor of local war hero James Caldwell, a pastor who used pages from his church's bibles as wadding to ignite the ammo in soldiers' cannons and helped to drive the British out of Horseneck.

The area of present-day Verona was part of what was known in the 1800s as Vernon Valley. The name was rejected when residents applied to the United States Postal Service, as the name had already been in use for an area in Sussex County. Verona was chosen as the alternative name for the community. The township's name is derived from Verona, Italy.

At various times between 1798 and 1892, issues arose which caused dissatisfaction between the Caldwell and Verona areas. These included a desire of the citizens of Verona to more closely control their own governmental affairs. With the population growing, Verona needed to centrally locate essential services such as schools and places of worship; problems with the water supply; and the disposition of road repair funds. On February 17, 1892, the citizens of Verona voted to secede from Caldwell Township to form Verona Township. Further growth and the need for a water system and other public utilities found Verona moving ahead of the other half of the township and in 1902 the two areas decided to separate into two separate municipalities: Verona Township and Verona Borough. It took two sessions of the state legislature to approve the new borough, but on April 18, 1907, the borough of Verona was approved by an act of the New Jersey Legislature, pending the results of a referendum held on April 30, 1907, in which the new borough passed by a 224-77 margin. Residents of the newly formed borough had sought to disassociate themselves from the Overbrook County Insane Asylum and the Newark City Home (a reform school), as well as from the settlement of Cedar Grove, which was considered a settlement of farmers. On April 9, 1908, Verona Township changed its name to Cedar Grove Township.

In 1981, the borough was one of seven Essex County municipalities to pass a referendum to become a township, joining four municipalities that had already made the change, of what would ultimately be more than a dozen Essex County municipalities to reclassify themselves as townships in order take advantage of federal revenue sharing policies that allocated townships a greater share of government aid to municipalities on a per capita basis. As an example of the potential benefits of switching to a township, Verona Borough received $213,000 in federal aid in 1976, while similarly sized Cedar Grove Township received $1.24 million. Today, Verona uses just "Township of Verona" in most official documents, but some other official documents such as purchase orders still include "Township of Borough of Verona".

Unincorporated communities, localities and place names located partially or completely within the township include Hillcrest and Verona Lake.

The township is bordered by Cedar Grove Township, Montclair Township, Essex Fells and North Caldwell. Verona lies between two mountains, the First and Second Watchung Mountains with a small river, the Peckman, flowing at the bottom of the valley towards the Passaic River at Little Falls.

Verona has a temperate climate, with warm/hot humid summers and cool/cold winters. The climate is slightly cooler overall during the summer than in New York City because there is no urban heat island effect.

January tends to be the coldest month, with average high temperatures in the upper 30s (Fahrenheit) and lows in the lower 20s. July is the warmest months with high temperatures in the mid 80s and lows in the mid 60s. From April to June and from September to early November, Verona enjoys temperatures from the lower 60s to upper 70s. Rainfall is plentiful, with around 44 inches (1,100 mm) a year. Snowfall is common from mid-January to early March and nor'easters can bring significant amounts of snow. In January 1996, a weather station in nearby Newark, New Jersey recorded over 31.8 inches (81 cm) of snow from the North American blizzard of 1996.

There were 5,315 households out of which 30.5% had children under the age of 18 living with them, 56.1% were married couples living together, 7.6% had a female householder with no husband present, and 33.7% were non-families. 29.7% of all households were made up of individuals, and 15.9% had someone living alone who was 65 years of age or older. The average household size was 2.47 and the average family size was 3.12.

Within the limits of the township lies Route 23 and CR 506 which runs directly through the township. CR 577 also runs through the southeastern portion of Verona. Other highways near Verona include the Garden State Parkway, Interstate 80 and the New Jersey Turnpike.

NJ Transit bus routes 11 and 29 serve the township, providing service to and from Newark. In September 2012, as part of budget cuts, NJ Transit suspended service to Newark on the 75 line. 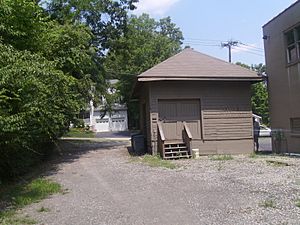 The last vestige of the Erie Railroad's Caldwell Branch, the Verona Freight station with the former right-of-way

Train stations, also run by New Jersey Transit, are located in the neighboring towns of Little Falls and Montclair. Prior to 1966, the Erie Railroad's Caldwell Branch (a part of New York and Greenwood Lake Railway) ran passenger service through Verona from Great Notch. The line was removed in 1979 after a washout four years prior. On July 14, 2010, the township of Verona announced that it was honoring the old freight shed at the Verona station, the last standing structure of the railroad. The project of naming it a historic landmark in Verona, the first of many proposed by the Verona Landmarks Preservation Commission. Proposals include moving the structure to a more accessible place in Verona or turning the shed into a one-room museum.

In the early 20th century, Verona was serviced by a trolley line which operated on Bloomfield Avenue. The tracks still lie underneath the roadway, and are visible when the roadway is under construction.

Annin & Co. is the world's oldest & largest flag manufacturer and had its main manufacturing plant in Verona from 1916 to 2013. The building was sold and redeveloped as apartments, which opened to tenants in 2018. Annin is the official flag manufacturer to the United Nations, and a major supplier to the United States Government. Annin produced flags that were used on Iwo Jima, at the North and South Poles, atop Mount Everest and the rubble of the World Trade Center. Annin's Verona factory also produced 186 stick flags that were carried to the moon in the Apollo 11 lunar lander and later distributed as mementos of the first moon landing. Annin does not claim that the flag planted on the moon was produced by Annin, either in Verona or at a plant in Bloomfield, NJ that was operating at the time, although the company's current president says that it has been assured by multiple sources that it was. The stars sections of all Annin flags were produced in Verona then. Annin President Carter Beard recently said that uniforms of the Apollo 11 astronauts were decorated with a silk-screened patch that may have been produced in Verona.

The high school mascot is the "Hillbilly". However, this mascot has become controversial as a result of opposition from previous school Superintendent Earl Kim. In the face of community support for the traditional name, the mascot was retained. The original mascot was depicted with a rifle and jug of moonshine. The rifle and jug and have been replaced with a fishing pole and a dog.

The district has been recognized on three occasions with the Best Practice Award, honoring specific practices implemented by a district for exemplary and/or innovative strategies. In addition, three schools in the district was named a "Star School" by the New Jersey Department of Education, the highest honor that a New Jersey school can achieve. The school was the 70th-ranked public high school in New Jersey out of 328 schools statewide in New Jersey Monthly magazine's September 2012 cover story on the state's "Top Public High Schools", after being ranked 53rd in 2010 out of 322 schools listed.

In 2020, Verona High School was the 31st-ranked public high school in New Jersey out of 305 schools statewide.

Founded in 1924, Our Lady of the Lake Catholic School serves students in pre-school through eighth grade, and is situated near Verona Park, operating under the auspices of the Roman Catholic Archdiocese of Newark. The school was recognized by the National Blue Ribbon Schools Program in 2011, one of 305 schools recognized nationwide and one of 14 selected from New Jersey. The school was honored a second time when it was one of eight private schools recognized in 2017 as an Exemplary High Performing School by the Blue Ribbon Schools Program of the United States Department of Education.

The Children's Institute (TCI) is a private, non-profit school approved by the New Jersey Department of Education, serving children facing learning, language and social challenges, for children ages 3–21. Dating back to an orphanage founded in 1883 in Newark, New Jersey, the school moved to Verona in 1999 after remodeling a building that had been donated by Hoffmann-LaRoche.

People who were born in, residents of, or otherwise closely associated with Verona include:

All content from Kiddle encyclopedia articles (including the article images and facts) can be freely used under Attribution-ShareAlike license, unless stated otherwise. Cite this article:
Verona, New Jersey Facts for Kids. Kiddle Encyclopedia.