New Jersey Monthly magazine ranked Cedar Grove as its 4th best place to live in Essex County and 17th best place overall to live in its 2008 rankings of the "Best Places To Live" in New Jersey.

In 2016, Cedar Grove was rated the 12th safest city in New Jersey by backgroundchecks.org.

What is now Cedar Grove was originally incorporated by an act of the New Jersey Legislature as the Township of Verona on February 7, 1892, from portions of Caldwell Township. Portions of the township were taken to create Verona borough, based on the results of a referendum held on April 30, 1907. On April 9, 1908, the name was formally changed to Cedar Grove. The township's name derives from the Eastern Red Cedar trees that once covered its valley and hillsides.

Cedar Grove was part of the Horseneck Tract, which was an area that consisted of what are now the municipalities of Caldwell, West Caldwell, North Caldwell, Fairfield, Verona, Cedar Grove, Essex Fells, Roseland, and portions of Livingston and West Orange.

In 1702, settlers purchased the 14,000 acres (57 km2) Horseneck Tract — so-called because of its irregular shape that suggested a horse's neck and head — from the Lenni Lenape Native Americans for goods equal to $325. This purchase encompassed much of western Essex County, from the First Mountain to the Passaic River.

Cedar Grove was originally a small farming community. In 1896, Essex County built the county mental institution in Cedar Grove known as Overbrook. In 1908, Cedar Grove was incorporated as a township. In the 1950s and 1960s, Cedar Grove became one of the destination suburbs in Essex County among those looking to escape urban living from Newark and New York City.

The township is located between the First and Second Watchung Mountains. The center of the township is in a valley that is about 280 feet (85 m) above sea level; however, many sections of Cedar Grove are well above 400 feet (120 m), including the Park Ridge Estates, the abandoned Essex County Hospital Center, and the eastern, southeastern and southern sections of Cedar Grove. Cedar Grove's highest point is on hilltop, where elevations reach 600 feet (180 m) and above. Cedar Grove is located approximately 12 miles (19 km) west of Midtown Manhattan and 4 miles (6.4 km) northwest of Newark.

Unincorporated communities, localities and place names located partially or completely within the township include Lindsley and Overbrook.

The sections of Cedar Grove are:

North End: The North End of Cedar Grove starts after the corner of Fairview Avenue and Pompton Avenue. It consists mostly of homes, but there are some businesses located on Pompton Avenue, and at the corner of E. Lindsley Road and Stevens Avenue. A notable part of the north end of town is the Park Ridge Estates, which contain million dollar homes.

Central Cedar Grove: This consists of the center of town and extends from the corner of Fairview Avenue and Pompton Avenue to the corner of Bradford Avenue and Pompton Avenue. The central portion of the town contains Cedar Grove's business district. Also, on the west central side of town is the former location of the Essex County Hospital Center, and on the east central side is the Cedar Grove Reservoir and Mills Reservation.

South End: The south end of Cedar Grove is the most urbanized part of the township, as it contains homes that are closer together. The south end extends from the corner of Bradford Avenue and Pompton Avenue to the Verona border. There are mostly homes here, but there are some businesses on Pompton Avenue, including Burger King, the Pilgrim Diner, and Staples. Like the north end of town, the south end contains a section of million dollar homes.

Cedar Grove's population density is less than the surrounding towns of Montclair, Verona, and Little Falls, mainly because significant portions of Cedar Grove are owned or previously owned by county or city governments. The Essex County Hospital Center took up a good amount of land and was owned by Essex County. Mills Reservation is a county owned park, and the Cedar Grove Reservoir property is owned by the City of Newark.

Cedar Grove is bordered by North Caldwell, Little Falls, Montclair, and Verona. Most of the eastern portion of the township is bordered by Upper Montclair (a neighborhood in Montclair).

Cedar Grove has a humid continental climate, with warm/hot humid summers and cool/cold winters. The climate is slightly colder overall during the summer and winter than in New York City because the urban heat island effect is not as prevalent.

January tends to be the coldest month, with average high temperatures in the upper 30s and low 40s and lows in the lower to mid 20s. July is the warmest months with high temperatures in the mid 80s and lows in the mid 60s. From April to June and from September to early November, Cedar Grove enjoys temperatures from the lower 60s to upper 70s. Rainfall is plentiful, with around 44 inches (1,100 mm) a year. Snowfall is common from mid January to early March and noreasters can bring a lot of snow. In January 1996, Cedar Grove received about record snowfall 3 feet (0.91 m) from the Blizzard of 1996.

There were 4,523 households out of which 29.7% had children under the age of 18 living with them, 59.5% were married couples living together, 8.4% had a female householder with no husband present, and 28.9% were non-families. 25.4% of all households were made up of individuals, and 13.7% had someone living alone who was 65 years of age or older. The average household size was 2.57 and the average family size was 3.12.

As of the 2000 Census, 29.7% of Cedar Grove's residents identified themselves as being of Italian ancestry (adjusted from the 34.8% reported to reflect the fact that residents reported multiple ancestries), the 18th highest of all municipalities in New Jersey. There was also a large Irish population, accounting for 21.7% of the population in the 2000 census, with another 12.1% of German ancestry.

There are two county parks located in Cedar Grove. 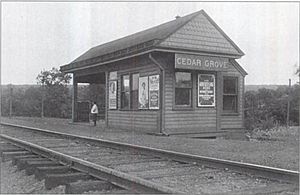 The Cedar Grove station on the Caldwell Branch of the Erie Railroad, in 1909

Commuter train stations are located in the neighboring communities of Little Falls and Montclair. The Erie Railroad's Caldwell Branch ran between Little Falls and West Caldwell, but trains were sparsely scheduled and the line was destroyed in the 1970s.

Most of the commercial zone in Cedar Grove is located on Route 23. The central business district starts at about Sweetwood Drive and extends to Little Falls Road just after the railroad bridge.

The township has an industrial district located along Commerce Road, which is off Route 23. In this district, there are light industrial factories and different types of commercial businesses.

Washington Academy is an approved private school for special education. Founded in 1982, the Academy provides specialized academic and behavioral services to students whose disabilities disrupt their academic and behavioral growth and progress. It serves students ages 3–21 (pre-K - 12th Grade). Washington Academy is a member of the National Association of Private Special Education Centers (NAPSEC), a non-profit organization dedicated to serving the needs of private special education schools. The school is located in the former Leonard R. Parks Elementary School on Route 23.

St. Catherine of Siena School is located on Bradford Avenue and operates under the supervision of the Roman Catholic Archdiocese of Newark.

People who were born in, residents of, or otherwise closely associated with Cedar Grove include:

All content from Kiddle encyclopedia articles (including the article images and facts) can be freely used under Attribution-ShareAlike license, unless stated otherwise. Cite this article:
Cedar Grove, New Jersey Facts for Kids. Kiddle Encyclopedia.