Caldwell was incorporated as a borough by an act of the New Jersey Legislature on February 10, 1892, from portions of Caldwell Township (now Fairfield Township), based on the results of a referendum held on the previous day. In 1981, the borough's name was changed to the "Township of the Borough of Caldwell", as one of seven Essex County municipalities to pass a referendum to become a township, joining four municipalities that had already made the change, of what would ultimately be more than a dozen Essex County municipalities to reclassify themselves as townships in order take advantage of federal revenue sharing policies that allocated townships a greater share of government aid to municipalities on a per capita basis. Effective January 26, 1995, it again became a borough.

Grover Cleveland, the 22nd and 24th President of the United States, and the only president to serve two non-consecutive terms, was born in Caldwell on March 18, 1837. His father, Rev. Richard Falley Cleveland, was pastor of the First Presbyterian Church. The Grover Cleveland birthplace—the church's former rectory—is now a museum and is open to the public.

Though today the Caldwell area is considered to be a suburb of both Newark and New York City, the area originally developed as its own individual, self-contained community and economy rather than as urban sprawl from a larger city. When it was formed, miles of woods separated downtown Caldwell from Newark or any of its developing suburbs.

New Jersey Monthly magazine ranked Caldwell as its third-best place to live in its 2010 rankings of the "Best Places To Live" in New Jersey.

In 1702, settlers purchased the 14,000 acres (57 km2) Horseneck Tract from the Lenni Lenape Native Americans for goods equal to $325. This purchase encompassed much of western Essex County, from the First Mountain to the Passaic River. Caldwell is located in the center of the Horse Neck Tract. Settlement began about 1740 by Thomas Gould and Saunders Sanders.

The Horseneck Tract consisted of modern-day Caldwell, West Caldwell, North Caldwell, Fairfield, Verona, Cedar Grove, Essex Fells, Roseland, and portions of Livingston and West Orange. This land was part of the larger purchase and had been referred to as the Horse Neck Tract until February 17, 1787, when the town congregation voted to change the name to Caldwell, in honor of the Reverend James Caldwell who pushed for their organization's creation.

Caldwell Township contained what is today the towns of West Caldwell and Caldwell. Soon after, the area of Caldwell Township just to the east of Caldwell Borough between Caldwell Borough and Montclair (present-day Verona and Cedar Grove) decided to follow Caldwell's lead and incorporated itself as its own borough, Verona. Some of the already developed eastern neighborhoods of Caldwell Township chose to become part of Montclair, as it was a rapidly developing suburb of Newark and Paterson. At around the same time, the area north of Caldwell Borough became its own town, North Caldwell. The wooded area directly to the south of downtown Caldwell Borough became Essex Fells. Meanwhile, the farmland to the south of the western portion of Caldwell township attempted to become its own municipality known as South Caldwell. This failed, as much of developed sections of that area lied on its southernmost and easternmost borders, along the expanding Newark suburbs of Livingston and West Orange respectively. Those areas were engulfed by those two towns once they became incorporated municipalities of several small villages and developments.

This left only the most rural farmland south of Caldwell Borough and Essex Fells to become its own township, Roseland. At this point, all that remained of the original Caldwell Township was a large piece of undeveloped land in the northwestern-most part of Essex County. In 1963, Caldwell Township changed its name to Fairfield in order to avoid being confused with Caldwell Borough.

Immediately following the separation of the original Caldwell, the western part of Caldwell Borough generally remained less developed than downtown Caldwell Borough and contained several farms and a large area of undeveloped swampland known as Hatfield Swamp. However, two individual settlements, known as Franklin and Westville, soon formed in the western part of Caldwell Borough. As development increased and population grew in the western part of Caldwell, the town's more rural western population and more urban east often could not reconcile their differences. This led to the areas of Franklin and Westville consolidating into their own township known as West Caldwell in 1904, leaving only the one square mile of original downtown Horseneck development as the borough of Caldwell. Lewis G. Lockward was elected the first mayor of Caldwell. In 1929, a failed attempt to consolidate the three Caldwells was rejected by voters.

This borough was one of the filming locations for the Columbia Pictures 1994 comedy film North.

Caldwell is part of "The Caldwells", the group of three Essex County municipalities which all have the word Caldwell in their name. Together with North Caldwell and West Caldwell, these communities are named after the Reverend James Caldwell, a Patriot who played an active role supporting the Continental Army during the American Revolutionary War, most notably his actions at the Battle of Springfield, where he gave the soldiers pages from hymn books to use as wadding for their rifle bullets. While each community has its own independent government, and the three municipalities have no shared governance (other than Essex County), the term is often used to refer to the area, including on highway exit signs. Signage for Exit 47B and 52 on Interstate 80 refer to "The Caldwells" as a destination. Fairfield Township was known as Caldwell Township until it abandoned its original name in 1963 in an effort to avoid confusion of mail distribution in the various Caldwells.

In a report performed by the United Way of Northern New Jersey based on 2012 data, around 34% of Caldwell households were classified as "Asset Limited, Income Constrained, Employed" households (below a threshold of $50,000 for households below 65, below $35,000 for those over 65), struggling with basic necessities, such as housing, childcare, food, health care, and transportation, compared to 38% statewide and 47% in Essex County.

There were 3,359 households out of which 23.0% had children under the age of 18 living with them, 40.3% were married couples living together, 9.8% had a female householder with no husband present, and 46.5% were non-families. 39.7% of all households were made up of individuals, and 14.8% had someone living alone who was 65 years of age or older. The average household size was 2.19 and the average family size was 3.01.

NJ Transit offers bus service to and from Caldwell on the 29 and 71 routes.

The Essex County Vocational Technical Schools offers magnet school and vocational programs to students in eighth through twelfth grades from Caldwell and all of Essex County.

Private schools in Caldwell include Trinity Academy for grades PreK-8 which was founded in 1991 and Mount Saint Dominic Academy for grades 9–12, which both operate under the auspices of the Roman Catholic Archdiocese of Newark. In 2015, Trinity Academy was one of 15 schools in New Jersey, and one of six private schools, recognized as a National Blue Ribbon School in the exemplary high performing category by the United States Department of Education.

The borough is home to Caldwell University, a catholic liberal arts college with 2,200 students. The West Essex Campus of Essex County College is located in West Caldwell. 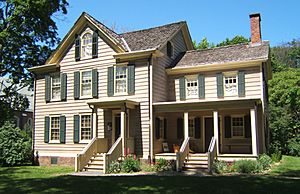 People who were born in, residents of, or otherwise closely associated with Caldwell include:

All content from Kiddle encyclopedia articles (including the article images and facts) can be freely used under Attribution-ShareAlike license, unless stated otherwise. Cite this article:
Caldwell, New Jersey Facts for Kids. Kiddle Encyclopedia.